Discovery will help Europe transition away from dependence on China

State-owned Swedish mining company LKAB says it has discovered a large deposit of rare-earth minerals, a critical component in electronics and electric vehicle batteries, which could reduce Europe’s dependence on China.

“This is the largest known deposit of rare earth elements in our part of the world, and it could become a significant building block for producing the critical raw materials that are absolutely crucial to enable the green transition,” LKAB’s chief executive Jan Moström said in a statement.

“We face a supply problem. Without mines, there can be no electric vehicles,” he added.

As world leaders embrace a hard pivot away from fossil fuels toward green technologies, rare earth elements will play a vital role in countries’ abilities to be competitive in the global economy.

Higher demand for rare earth minerals due to climate policies could lead to undersupply, which could increase geopolitical tensions. LKAB says that demand for rare earth elements is expected to increase fivefold by the year 2030. But, the company’s discovery could provide Europe an offramp from reliance on China.

“Electrification, the EU’s self-sufficiency and independence from Russia and China will begin in the mine. We need to strengthen industrial value chains in Europe and create real opportunities for the electrification of our societies,” says Ebba Busch, Swedish Deputy Prime Minister for Energy, Business and Industry.

“Politics must give the industry the conditions to switch to green and fossil-free production,” she added. “Here, the Swedish mining industry have a lot to offer. The need for minerals to carry out the transition is great.”

LKAB identified more than one million tons of rare earth elements and says between the mining and permit process, it will take at least 10-15 years to bring the elements to market. 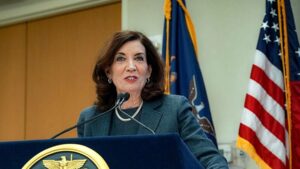