Under Swedish law, parents or guardians have a special duty to protect their children

A mother was convicted in Sweden of violating international law and committing a war crime because she took no action to prevent her underage son from becoming a child soldier for the Islamic State.

Lina Ishaq was convicted by the Stockholm District Court on March 4 and sentenced to six years in prison. Ishaq has been in custody in Sweden since September.

She and her husband were involved in a sect of the Islamic State that advocated for Sharia law and the armed defense of its ideology. The group also called for the emigration to fundamentalist societies, per AP News.

Ishaq reportedly brought her son to Syria in April of 2013 in order to reunite with her husband and older son.

Her son, Joan, was born in 2001 and died in 2017 after being recruited to fight for the Islamic State in Syria.

The court ruled that Ishaq was aware of how the IS used her son and was complicit in his involvement with the militant group.

“She has not taken adequate steps to stop this, neither has she wanted to stop it, but his role as a child soldier had been in accordance with her convictions,” the court said its statement.

According to the court, Ishaq “in her capacity as protection guarantor, omitted to prevent her son Joan, 12-15 years, from being recruited by unknown accomplices and used as child soldier on behalf of IS in the armed conflict in Syria.”

Prosecutors contend that between August of 2013 and May of 2016, Joan participated “in hostilities performed by armed groups, including the terrorist organization IS.”

Swedish law permits people to be prosecuted for crimes committed outside the country which violate international law.

The United Nations prohibits using children ages 15 and younger as soldiers. The International Criminal Court regards the practice as a violation of international humanitarian law and as a war crime, per Al Jazeera.

During her trial, Ishaq denied any wrongdoing. She claimed her husband lured her back to Syria.

In the past decade, around 300 people from Sweden have journeyed to Syria and Iraq to join terrorist groups like the Islamic state and other groups associated with al-Qaeda, according to a 2017 analysis published by Swedish Defense 2017. 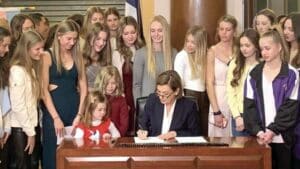