A Ukrainian member of parliament claimed that “World War III has already started” during an appearance on Fox News.

The lawmaker, Alexey Goncharenko, appeared on Fox & Friends First to urge the United States to provide his country with more weapons.

Host Trace Gallagher was discussing how the US was “hesitant” to put boots on the ground in the conflict, out of concern that it could spark World War III.

“The World War III already started. If somebody doesn’t see it, it’s their problem,” Goncharenko said. “It’s war, not against Ukraine, but against the whole free world.”

Despite his assertion, Goncharenko claimed that Ukraine does not want the US to send soldiers — just weapons — though he would later contradict that claim.

“We are not asking for boots on the ground, but give us possibilities,” Goncharenko said.

Goncharenko went on to request Patriot missiles and a “no-fly-zone on the border with Poland,” which would have to be enforced by troops ready to shoot down Russian planes. He said that he wanted a “humanitarian air corridor” to assist with evacuating “children” from conflict zones.

Additionally, the lawmaker asked for the US to ban Russian oil and gas.

Goncharenko stated that if Putin invades Kiev, “We will meet him there and there will be a hell for them, I assure you.”

While he predicts that Ukraine will ultimately win the war, he said that there could be a “massacre” if Russia takes any major cities.

“Certainly, there will be guerilla fighting and we will never accept” the Russian government, he said. “We want peace, we want peace as soon as possible, but we are not going to surrender.”

“Putin is speaking about peace talks on the one hand, and another hand he is throwing missiles and bombs to our kindergartens,” the lawmaker added. “It looks like all these peace talks from Putin for the moment are just tricks.”

Russian-backed rebels and the Ukrainian military have both accused each other of firing on the kindergarten on February 25. Two civilians were shell-shocked from the incident, no deaths were reported. 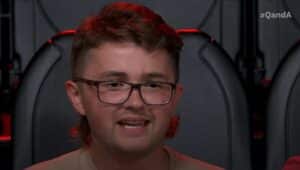