President Joe Biden’s nationwide mandate that large businesses either require COVID-19 vaccinations or test their workers weekly will be heard by the Supreme Court in January.

The court will also hear arguments regarding a separate vaccine requirement for health care workers at the same time.

The brief court order said the justices will hear oral arguments on January 7 in the two cases, with rulings likely to follow swiftly after.

In both cases, the court delayed action on emergency requests that sought an immediate decision until the new year.

The federal workplace mandate is currently in effect nationwide, even though multiple circuit courts have made attempts to block the mandate previously.

The challenges are set to be heard by Justice Brett Kavanaugh and come to the court amid the nation’s recent surge of the Omicron variant of COVID.

On Friday, an appeals court allowed the workplace mandate, which covers 80 million American workers, to go into effect. This prompted businesses, states and other groups challenging the policy to ask the Supreme Court to block it.

Twenty-seven primarily GOP-led states, various businesses and business groups are among those challenging the mandate. There are also two large religious entities, including the Southern Baptist Theological Seminary in Louisville, Kentucky, challenging the policy.

Last week, the 6th U.S. Circuit Court of Appeals in Cincinnati ruled to remove the injunction that blocked the workplace rule, affecting more than 100 employers. The rule is being implemented by the Occupational Safety and Health Administration (OSHA).

The health care worker rule has been challenged by primarily GOP-led states. The rule required more than two million unvaccinated health care workers to receive a first vaccine dose by Dec. 6, 2021, or be at risk of losing employment.

The basis of the arguments to be heard in both mandates rests on whether the Secretary of Labor and entities like OSHA have the right to enforce a requirement on employees to undergo a permanent medical procedure to maintain employment. 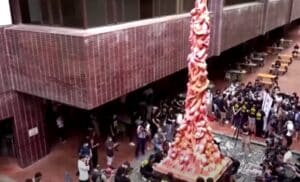