On Thursday, the Supreme Court blocked the Biden administration from enforcing the latest eviction moratorium ordered by the Center for Disease Control (CDC).

“The CDC’s moratorium was originally slated to expire on December 31, 2020,” the Court wrote. “But Congress extended it for one month as part of the second COVID-19 relief Act. As the new deadline approached, the CDC again took matters into its own hands, extending its moratorium through March, then again through June, and ultimately through July.”

As previously reported, “The CDC found authority for passing the order through a creative reading of the Public Health Service Act of 1944, which gives the CDC the power to halt disease by providing for ‘such inspection, fumigation, disinfection, sanitation, pest extermination, destruction of animals or articles found to be so infected or contaminated as to be sources of dangerous infection to human beings, and other measures.’”

“The CDC used the ‘other measures’ standard to bridge the gap between acts like providing for ‘sanitation’ and effectively seizing homes owned by landlords to allow people to live there for free.”

The Supreme Court noted that this public health law “has rarely been invoked—and never before to justify an eviction moratorium. Regulations under this authority have generally been limited to quarantining infected individuals and prohibiting the import or sale of animals known to transmit disease [like] (banning small turtles known to be carriers of salmonella).”

The U.S. Sixth Circuit Court of Appeals explained, “That reading would grant the CDC director near-dictatorial power for the duration of the pandemic, with authority to shut down entire industries as freely as she could ban evictions.”

The Supreme Court discussed potential powers that reading could grant the CDC, writing, “Could the CDC, for example, mandate free grocery delivery to the homes of the sick or vulnerable? Require manufacturers to provide free computers to enable people to work from home? Order telecommunications companies to provide free high-speed Internet service to facilitate remote work?”

The Supreme Court concluded that in order for an eviction moratorium to be legislated, the legislative branch would need to do so.

“If a federally imposed eviction moratorium is to continue, Congress must specifically authorize it. The application to vacate stay presented to THE CHIEF JUSTICE and by him referred to the Court is granted,” the Court wrote. 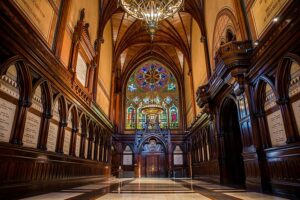