'Both the Free Exercise and Free Speech Clauses of the First Amendment protect expressions like Mr. Kennedy’s,' wrote Justice Gorsuch

A Washington public high school violated a football coach’s religious freedom by banning him from praying on the field after games according to the Supreme Court.

The case, Kennedy v. Bremerton School District, had been regarded as an important test of the First Amendment and ends a six-year legal battle.

The court ruled in favor of the praying coach in a 6-3 vote that was released on June 27.

“The Constitution and the best of our traditions counsel mutual respect and tolerance, not censorship and suppression, for religious and nonreligious views alike,” wrote Justice Neil Gorsuch, who authored the majority opinion.

For several year, Coach Joseph Kennedy led players on the football team at Bremerton High School in prayer before and after games. When the district was made aware by a coach from a rival school in 2015, Kennedy was asked to stop out of concern the prayers could be a form of religious coercion. The school district also expressed concern that Kennedy’s beliefs were being represented as those of the public school, where religious activities are restricted.

Kennedy, who has said his actions were inspired in part by the 2006 film Facing the Giants, stopped praying before games but continued to pray after games. He was placed on leave in October of 2015 after media outlets and game attendees gathered on the field during his prayer after a game, per the BBC.

The coach sued the school district for violating his constitutionally protected right to practice his religion.

The First Amendment guarantees freedom of speech and religious exercise but prohibits the state from establishing a religion.

“Both the Free Exercise and Free Speech Clauses of the First Amendment protect expressions like Mr. Kennedy’s,” wrote Gorsuch. “Nor does a proper understanding of the Amendment’s Establishment Clause require the government to single out private religious speech for special disfavor.”

“Mr. Kennedy prayed during a period when school employees were free to speak with a friend, call for a reservation at a restaurant, check email, or attend to other personal matters,” the justice noted. “For over seven years, no one complained to the Bremerton School District (District) about these practices.”

The opposing coach, who made the district aware of the “tradition,” “commented positively on the school’s practices to Bremerton’s principal.” Kennedy has denied ever pressuring any players to join him in prayer but did allow those who requested to join to pray with him.

“Not only does the District fail to offer a sound reason to prefer one constitutional guarantee over another… it cannot even show that they are at odds,” Gorsuch stated, referring to the Free Exercise and Free Speech Clauses and the Establishment Clause. “In no world may a government entity’s concerns about phantom constitutional violations justify actual violations of an individual’s First Amendment rights.”

During oral arguments, the attorneys for the coach and the school district debated the implication of where Kennedy led his prayers — kneeling on the 50-yard-line. The school district said the public nature of the location made the prayers an open demonstration of Christianity rather than a personal practice.

“Kennedy urged the Supreme Court to find that he was acting on his own behalf, expressing his own religious views, not speaking as a mouthpiece for the school. But the school district said the students on the football team looked up to their coach and felt coerced into doing as he did,” reports NBC News. “Kennedy now lives in Florida but has said that if the Supreme Court ruled in his favor, he would return to Bremerton and seek to regain his job as a part-time football coach.”

The American Civil Liberties Union submitted a brief to the court challenging Kennedy’s First Amendment claims. Similar to attorneys for the Bremerton school district, the organization says that Kennedy was conducting his official duties as an employee of a public school and was therefore violating the Establishment Clause.

“Recognizing the coercive harms that school-sponsored religious practices impose on students, the Supreme Court has held for more than half a century that the First Amendment forbids public schools and their officials from promoting religious beliefs or organizing, encouraging, or leading prayer among students,” the ACLU noted in April.

“This case is about whether a public school must permit a school official to kneel, bow his head, and say a prayer at the center of a school event. The Constitution does not authorize, let alone require, public schools to embrace this conduct,” wrote Sotomayor. “In the process, the Court rejects longstanding concerns surrounding government endorsement of religion and replaces the standard for reviewing such questions with a new ‘history and tradition’ test.”

“This decision does a disservice to schools and the young citizens they serve, as well as to our Nation’s longstanding commitment to the separation of church and state,” the justice wrote. 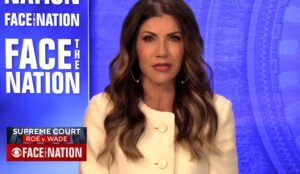