“Mr. Trump, after watching Congress cut his request for wall money, had sought to siphon funding from Pentagon accounts toward the wall, drawing a flurry of lawsuits,” reports The Washington Examiner.

Initially, a federal district judge in California ruled that the funding shift was illegal. The U.S. Court of Appeals for the 9th Circuit upheld the decision, but the Supreme Court said the border wall’s construction could continue while the case went through further legal review.

The Biden administration had said the high court did not need to evaluate the case because the project had been defunded.

In its decision, the Supreme Court wrote the district court needed to review “what further proceedings are necessary and appropriate in light of the changed circumstances in this case.”

With a record-high number of migrants illegally crossing the southern border, several states had begun acting on their own to secure the border. According to Texas Governor Greg Abbott’s office, the state had received $54,323,095 in donations to construct a border wall as of Sept. 28.

“While securing the border is the federal government’s responsibility, Texas will not sit idly by as this crisis grows,” Abbott said in a statement. “Texas is responding with the most robust and comprehensive border plan the nation has ever seen.”

The Texas Tribune reports that “an existing contract awarded by the Texas Department of Transportation in June is set to pay $25 million for a nearly 2-mile stretch of “concrete barrier” along State Loop 480 in Eagle Pass. But costs for the wall’s construction may vary depending on the area where the state is building.”

In late September, there were at least 3,400 illegal migrants at a Border Patrol holding facility in Yuma, Arizona. Yuma County Sheriff Leon Wilmot told The Washington Times that on an average day, there are over 600 migrants apprehended at the border. He said that at the end of Trump’s presidency, the daily average was 25 to 35. 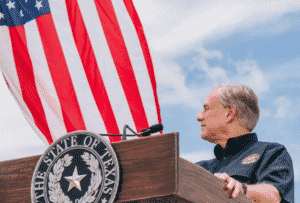