“I’m going to make sure that I have security because I know I have had attempts on my life and I have too much work to do. There are too many people that need help right now for me to allow that,” said Bush.

“So, if I end up spending $200,000, if I spend ten more dollars on it, you know what, I get to be here to do the work,” she added. “So, suck it up. Defunding the police has to happen, we need to defund the police and put that money into social safety nets.”

“Suck it up. And defunding the police needs to happen.” pic.twitter.com/fQU42ZlMsM

The self-described Democratic-Socialist was speaking at a campaign event for former state Senator and ex-Bernie Sanders campaign co-chair Nina Turner, who was running to represent Ohio’s 11th Congressional District.

“I want to abolish our carceral system that’s designed to trap Black and Brown men,” AOC told a rally of Turner supporters in Cleveland. “I want justice, I want peace, and I want prosperity. That’s what I want.”

Rep. @CoriBush on CBSN responding to critics who point out she spent roughly $70,000 on private security while calling to defund the police: https://t.co/GHcR9qFVxG pic.twitter.com/GhCLha7BNR 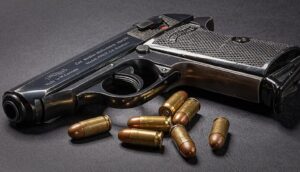