The Mexican government filed a lawsuit on Wednesday against US gun manufacturers for weapons making their way across the border and into the hands of cartels.

The government claims that the lawsuit, filed in the U.S. District Court in Boston, aims to “put an end to the massive damage that the Defendants cause by actively facilitating the unlawful trafficking of their guns to drug cartels and other criminals in Mexico.”

“For decades, the government and its citizens have been victimized by a deadly flood of military-style and other particularly lethal guns that flows from the U.S. across the border,” the lawsuit reads, according to a report from the New York Times. The flood of weaponry is “the foreseeable result of the defendants’ deliberate actions and business practices.”

Smith & Wesson Brands, Inc.; Barrett Firearms Manufacturing, Inc.; Beretta U.S.A. Corp.; Colt’s Manufacturing Company LLC, and Glock Inc.; and Interstate Arms, a Boston-area wholesaler, are all listed in the lawsuit according to a report from the Associated Press.

“The government estimates that 70% of the weapons trafficked to Mexico come from the U.S., according to the Foreign Affairs Ministry. And that in 2019 alone, at least 17,000 homicides were linked to trafficked weapons,” the AP report states.

The National Shooting Sports Foundation blasted the lawsuit, telling AP that Mexico should worry about the corruption happening in their own nation — and enforcing their own laws.

“These allegations are baseless. The Mexican government is responsible for the rampant crime and corruption within their own borders,” said Lawrence G. Keane, the group’s senior vice president and general counsel.

Keane pointed out that the Mexican government’s numbers are flawed, as only guns with serial numbers can be tracked and those are more likely to have come from the United States.

“Mexico’s criminal activity is a direct result of the illicit drug trade, human trafficking and organized crime cartels that plague Mexico’s citizens,” Keane said, adding that the Mexican government “is solely responsible for enforcing its laws — including the country’s strict gun control laws — within their own borders.”

Alejandro Celorio, legal advisor for the ministry, said during a press conference that they will be seeking at least $10 billion in compensation. He also claimed that they are not seeking to change American laws.

“We don’t do it to pressure the United States,” Celorio claimed. “We do it so there aren’t deaths in Mexico.” 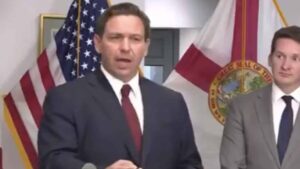