Study Finds Over 25,000 Tons of COVID-Related Plastic Waste Has Been Dumped in the Ocean

A newly released study has concluded that over 25,000 tons of COVID-related plastic waste has been dumped into the oceans.

The study, entitled “Plastic waste release caused by COVID-19 and its fate in the global ocean,” was published in the online journal PNAS.

The authors of the study found that “more than eight million tons of pandemic-associated plastic waste have been generated globally.”

“Plastic waste causes harm to marine life and has become a major global environmental concern. The recent COVID-19 pandemic has led to an increased demand for single-use plastic, intensifying pressure on this already out-of-control problem,” the author wrote.

The majority of the plastic waste that is polluting the waters is from medical waste generated by hospitals, which the researchers found “dwarfs the contribution from personal protection equipment and online-shopping package material.”

In order to sustain the demand for personal protective equipment including face masks, gloves, and face shields, many single-use plastic legislations have been withdrawn or postponed.

“In addition, lockdowns, social distancing, and restrictions on public gathering increase the dependency on online shopping at an unprecedented speed, the packaging material of which often contains plastics,” the report states.

The ocean will be flooded with an estimated 1.56 billion face masks in 2020, according to a report released in December 2020 by OceansAsia. The researchers in that study noted that the masks will take as long as 450 years to break down, “slowly turning into microplastics while impacting marine life and ecosystems.”

“The 1.56 billion face masks that will likely enter our ocean in 2020 are just the tip of the iceberg,” said Teale Phelps Bondaroff, OceansAsia’s director of research. “The 4,680 to 6,240 metric tons of face masks are just a small fraction of the estimated 8 to 12 million metric tons of plastic that end up in our ocean each year.”

Plastic pollution kills millions of seabirds and animals each year.

“Marine plastic pollution in general is devastating our ocean,” Gary Stokes, Oceans-Asia’s director of operations, said in the report. “Plastic pollution kills an estimated 100,000 marine mammals and turtles, more than a million seabirds, and even greater numbers of fish, invertebrates, and other animals each year. It also affects fisheries and the tourism industry and costs the global economy an estimated $13 billion USD per year.” 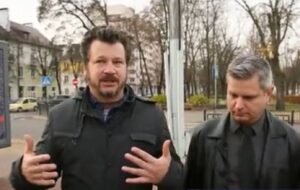