A coalition of twenty-five states filed a brief with the Supreme Court urging the justices to review a case challenging Maryland’s strictest gun law.

The Fourth Circuit Court of Appeals upheld Maryland’s Firearms Safety Act of 2013 in September of 2021.

The law requires state residents to take safety training courses and submit to fingerprinting to get a firearm license and to purchase a pistol.

The law includes a definition of assault weapons and limits magazine capacity to 10 rounds of ammunition. The policy also virtually bans the sale, transfer, or receipt of a semi-automatic weapon. This includes AR-15 and similar rifles.

West Virginia, Arizona, and 23 other states have asked the nation’s highest court to review Bianchi v. Frosh, the case challenging the law. They believe the law infringes on Americans’ constitutional right to bear arms by restricting what guns lawful citizens may possess.

“Americans do not require approval from a local jurisdiction to exercise their constitutional rights,” said Arizona Attorney General Mark Brnovich in a press release on Jan. 27. “We must vigorously oppose this type of misguided overreach at all levels of government.”

“Banning certain types of firearms goes against Supreme Court precedent and steps on the Second Amendment,” he said in a statement. “Law-abiding gun owners routinely use these firearms for self-defense or sporting. Such an unconstitutional act cannot stand.”

The group says that 43 states allow guns, which are “common to the point of ubiquity,” that Maryland’s law seeks to ban.

According to the brief, the 25 states “protect public safety and advance citizen interests by allowing individuals to lawfully possess and use arms the challenged Maryland law would ban.”

“States may enact reasonable firearm regulations that do not categorically ban common arms core to the Second Amendment,” the brief says. “But the challenged law fails because it is broadly prohibitive rather than regulatory.”

The states argue that if the Supreme Court does not overturn the appellate court’s ruling, the decision will establish case law in West Virginia, Maryland, North Carolina, South Carolina, and Virginia which have similar laws.

The Supreme Court issued an order on Jan. 14 to Maryland Attorney General Brian Frosh compelling him to respond to a pension filed by the plaintiffs.

The Center for American Progress said the 2013 Firearms Safety Act was linked to a reduction “in the trafficking of handguns into the underground crime gun market” and was therefore a benefit to the state.

The law was enacted in Maryland following the shooting at Sandy Hook Elementary School in Newtown, Connecticut on Dec. 14, 2012. 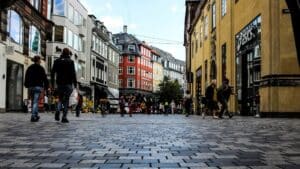