House Speaker Nancy Pelosi’s husband, Paul, was arrested for driving under the influence of alcohol in California on Saturday evening.

Paul Pelosi, 82, was arrested just before midnight on Saturday evening in Napa County.

According to a report from TMZ, the speaker’s husband was then booked “hours later” into jail for driving under the influence and driving with a blood alcohol content level of 0.08 or higher, according to the public booking report.

Both charges are misdemeanors and his bond was set at $5,000.

The speaker was not with her husband at the time of his arrest. She was in Rhode Island delivering the commencement address to Brown University graduates.

“The Speaker will not be commenting on this private matter which occurred while she was on the East Coast,” Drew Hammill, a spokesman for the Speaker, told Fox News.

Though Paul generally keeps a low profile, the New York Post reports that “in March, he bought $2.2 million in Tesla stock as some in Congress proposed banning lawmakers and their spouses from stock trading.”

It is currently unclear if anyone else was in the vehicle at the time of the incident. 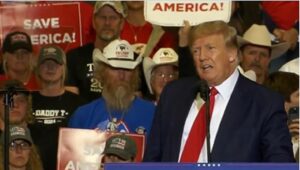 Trump: 'The Cheneys Are Diehard Globalists and Warmongers… Plunging Us Into New Conflicts For Decades'