Company says politicians are responsible for surge in crime, not gun manufacturers

Firearm manufacturer Smith & Wesson Brands, Inc. rebuffed attacks from lawmakers who have taken aim at the industry after dramatic increases in crime have swept across the United States.

“A number of politicians and their lobbying partners in the media have recently sought to disparage Smith & Wesson,” Mark Smith, Smith & Wesson CEO, said in a press release. “Some have had the audacity to suggest that after they have vilified, undermined and defunded law enforcement for years, supported prosecutors who refuse to hold criminals accountable for their actions, overseen the decay of our country’s mental health infrastructure, and generally promoted a culture of lawlessness, Smith & Wesson and other firearm manufacturers are somehow responsible for the crime wave that has predictably resulted from these destructive policies.”

Smith added, “But they are the ones to blame for the surge in violence and lawlessness, and they seek to avoid any responsibility for the crisis of violence they have created by attempting to shift the blame to Smith & Wesson, other firearm manufacturers and law abiding gun owners.”

Smith & Wesson is one of several gun manufacturers who came under fresh scrutiny from lawmakers.

The House panel summoned Smith, along with the heads of Sturm, Ruger & Co., and Daniel Defense to testify in an inquiry into their business and marketing practices. Smith declined to appear for the hearing.

Some Democrats sought to take the CEOs to task, using their opening remarks to blame gun manufacturers for a surge in violent crime.

“The gun industry has flooded our neighborhoods, our schools, even our churches and synagogues, and gotten rich doing it,” Committee Chairwoman Carolyn Maloney said in her opening statement.

However, in his company’s formal response to the onslaught of attacks against the firearm industry, Smith cited the failures of U.S. policymakers as the cause of escalating violent crime in American cities.

It is no surprise that the cities suffering most from violent crime are the very same cities that have promoted irresponsible, soft-on-crime policies that often treat criminals as victims and victims as criminals. Many of these same cities also maintain the strictest gun laws in the nation. But rather than confront the failure of their policies, certain politicians have sought more laws restricting the 2nd Amendment rights of law-abiding citizens, while simultaneously continuing to undermine our institutions of law and order. And to suppress the truth, some now seek to prohibit firearm manufacturers and supporters of the 2nd Amendment from advertising products in a manner designed to remind law-abiding citizens that they have a Constitutional right to bear arms in defense of themselves and their families.

The U.S. House of Representatives recently voted on legislation banning semi-automatic firearms. The bill passed largely on party lines, but is expected to stall in the 50 – 50 Senate where 60 votes are needed for it overcome a filibuster.

Editor’s Note: The title of this article has been revised from its initial title, “Smith & Wesson Fires Back at U.S. Lawmakers,” to provide a more specific description to our readers. 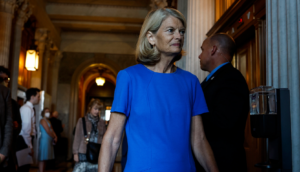