Arizona Sen. Kyrsten Sinema is continuing to break from her party, affirming her support for reinstating a full filibuster — even for votes where it has been eliminated already.

The centrist lawmaker made the remarks while speaking at the McConnell Center at the University of Louisville in Kentucky on Monday.

The vast majority of the Democratic Party has been looking to remove the filibuster entirely, but Sen. Sinema believes that it is not what the founders had in mind.

“It’d be bad for us as Americans to think that we should always feed our short-term desires, rather than thinking about the long term,” Sinema said, according to a report from the Washington Examiner. “So not only am I committed to the 60-vote threshold, I have an incredibly unpopular view — I actually think we should restore the 60-vote threshold for the areas in which it has been eliminated already.”

Sen. Kyrsten Sinema (D-AZ) says she’s not only against abolishing the filibuster, she’s for strengthening it: “The best thing you can do for your child is to not give them everything they want… We should restore the 60-vote threshold for areas in which it has been eliminated.” pic.twitter.com/OR53ymuE4x

Sen. Sinema said that while scrapping the filibuster would make it easier to confirm judges, keeping it will force politicians to find more middle ground.

During Sen. McConnell’s introduction, he praised Sinema for being “the most effective first-term senator I’ve seen in my time in the Senate.”

Sen. Sinema, along with West Virginia Sen. Joe Manchin, have crossed party lines several times to stop high-profile priorities of the Biden administration, including abolishing the filibuster and Build Back Better.

The Arizona Senator also praised the minority leader, saying “despite our apparent differences, Senator McConnell and I have forged a friendship. One that is rooted in our commonalities, including our pragmatic approach to legislating, our respect for the Senate as an institution, our love for our home states, and a dogged determination on behalf of our constituents.”

Sinema: “While (McConnell) and I don’t agree on every issue, we share the same values.”

Sen. Sinema added, “you know, in today’s partisan Washington, it might shock some that a Democratic senator would consider the Republican leader of the Senate, her friend, but back home in Arizona, we don’t view life through a partisan lens. Arizonans understand that while we may not agree on every issue, we do share the same values.” 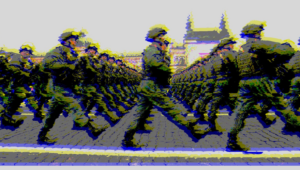