Maryland Senator Chris Van Hollen was taken to the hospital after he suffered a stroke while delivering a speech.

While speaking in Western Maryland, Van Hollen experienced lightheadedness and acute neck pain. He sought treatment at George Washington University Hospital where an angiogram revealed a “small venous tear” at the back of the politician’s head, indicating a minor stroke.

“Fortunately, I have been informed that there are no long-term effects or damage as a result of this incident, but my doctors have advised that out of an abundance of caution I remain under observation for a few days,” Van Hollen said in a statement released on the evening of May 15. “I look forward to returning to work in the Senate later this week and thank the medical team for their excellent care.”

The senator told his followers on Twitter that he is “feeling much better” but will abide by the doctor’s advice and “curtail [his] schedule for the next few days.”

On the same day, Pennsylvania Lieutenant Governor John Fetterman announced he had suffered a stroke on May 13. Fetterman is currently seeking election to the U.S. Senate.

The Democrat said that he sought medical attention from physicians at Penn Medicine Lancaster General Hospital at his wife’s insistence.

“I had a stroke that was caused by a clot from my heart being in an A-fib rhythm for too long,” Fetterman said in a statement. “The amazing doctors here were able to quickly and completely remove the clot, reversing the stroke, they got my heart under control as well.”

Fetterman, 52, said he did not suffer “any cognitive damage” and is expected to make a full recovery.

On Friday, I wasn’t feeling well, so I went to the hospital to get checked out.

I didn’t want to go – I didn’t think I had to – but @giselefetterman insisted, and as usual, she was right.

The good news is I’m feeling much better + I’m well on my way to a full recovery. pic.twitter.com/WQ5X6QgQen

According to the Centers for Disease Control and Prevention, “stroke is a leading cause of death for Americans, but the risk of having a stroke varies with race and ethnicity.”

Black Americans have the highest risk of dying from a stroke. Additionally, the risk of stroke increased with age. In 2014, 62% of those hospitalized for a stroke were over the age of 65. 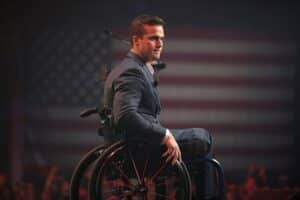 Trump Calls on Supporters to Give Rep. Madison Cawthorn Another Chance in North Carolina Primary