Senator Bernie Sanders is the latest political figure to be asked about a possible second term for President Joe Biden.

Congresswoman Alexandria Ocasio-Cortez and White House Press Secretary Karine Jean-Pierre were both also questioned by CNN on Biden’s plan for a second term in recent days.

The independent politician from Vermont told CNN on June 13 that he will not challenge the president if he seeks reelection in 2024. Sanders has twice previously sought the Democratic Party’s nomination for the presidency.

“I think it’s a little too early,” Sanders said. “I think Biden will probably run again, and if he runs again, I will support him.”

His statement came the day after Ocasio-Cortez seemed to evade offering a definite opinion on a possible second term for the Biden administration.

“We’ll cross that bridge when we get to it,” the New York representative told Dana Bash on State of the Union. “I think if the President has a vision, then that’s something certainly we’re all willing to entertain and examine when the time comes.”

“We should endorse when we get to it, but I believe that the President’s been doing a very good job so far, and, you know, should he run again, I think that I, you know, I think … we’ll take a look at it,” she added. “But right now, we need to focus on winning a majority instead of a presidential election.”

The network’s Don Lemon pushed Jean-Pierre to comment on Biden’s plans for 2024 on June 13.

“Does the president have the stamina, physically and mentally, do you think to continue on even after 2024?” Lemmon asked during a televised interview.

“Don, you are asking me this question. Oh my gosh,” the press secretary replied. “That is not a question that we should be even asking. Just look at the work that he does. Look at how he is delivering.”

“Biden’s numbers also fall below that of President Donald Trump at the same time four years ago, when 45% approved and 52% disapproved of the former president,” according to AL.com.

During a press briefing at the White House, Jean-Pierre said Biden has already answered questions about his intention regarding a second term.

“His answer has been pretty simple, which is, yes, he’s running for reelection,” she told reporters. “I can’t say more than that.”

Biden said in an interview in December that he would seek reelection provided that he was in good health. Biden was 78-years-old when he took office in 2021. If reelected at the age of 82, Biden would break his own record as the oldest president in the nation’s history. 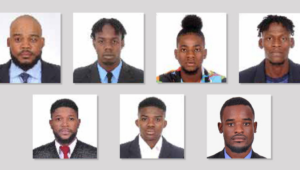