The senate voted on Tuesday to advance a gun control package with the support of 14 Republicans.

The 64 to 34 vote gave Democrats hope that they will be able to break the 60 vote threshold to pass the legislation when it goes up for an official vote. Just ten Republicans would need to break with their party for it to pass and avoid a filibuster.

If passed without a filibuster, it would go to a final passage vote, then be sent to the House.

Rep. Matt Gaetz said during an interview with Breitbart News on Saturday, June 18 that the deal rests on using “federal money to bribe states to enact red flag laws.”

Rep. Gaetz stated, “literally using the federal government to bribe the states to deprive citizens of their Second Amendment rights.”

Sen. John Cornyn, who worked on the bill, was “viciously booed” during much of his speech at the Republican Party of Texas Convention.

US Sen John Cornyn gets viciously booed during much of his speech here at the Republican Party of Texas Convention. Here’s his closing remarks and the cascade of boos. pic.twitter.com/m2Hua9WdrV

In a statement about her vote, WV Sen. Capito claimed that the “bill is not about issues such as red flag laws,” despite it being the most controversial portion of the bill.

“My vote this evening is a vote to continue this critically important debate because it’s a debate worth having. My vote also recognizes the hard work my colleagues have done on the framework,” Capito said in a statement. “Increasing funding for mental health services, school safety initiatives, and in our background check system, are all worthwhile. This bill is not about issues such as red flag laws, which will never be enacted in our state. This bill is about addressing issues such as mental health. It is also about keeping law abiding and gun owning West Virginians safe.”

Senate Minority Leader McConnell, the lead Republican negotiator on the bill, said in a statement, “For years, the far left falsely claimed that Congress could only address the terrible issue of mass murders by trampling on law-abiding Americans’ constitutional rights. This bill proves that false. Our colleagues have put together a commonsense package of popular steps that will help make these horrifying incidents less likely while fully upholding the Second Amendment rights of law-abiding citizens.”

Biden is expected to sign the legislation if it passes through the House. 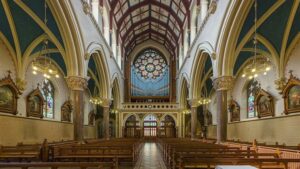 Number of Americans Who Believe in God Drops to Record Low