Sen. Rand Paul Says He Hopes for a Freedom Convoy in the US, Encourages Them to ‘Clog Cities Up’

Senator Rand Paul has said that he hopes to see a Freedom Convoy in the United States.

Many American truckers have already joined with the Canadians, who are protesting the government’s COVID vaccine mandate for drivers who cross the US-Canada border.

Speaking to the Daily Signal about a potential convoy forming in Los Angeles during the Super Bowl, Sen. Paul said, “I’m all for it.”

The Kentucky senator added, “Civil disobedience is a time-honored tradition in our country, from slavery to civil rights, you name it. Peaceful protest, clog things up, make people think about the mandates.”

“And some of this, we started,” he added. “We put [COVID-19] mandates on truckers coming across the border from Canada so then they put mandates on, and the truckers are annoyed. They’re riding in a cab by themselves, most of them for eight, 10-hour long hauls, and they just want to do what they want to do. It’s their own business.”

Senate Paul said that healthcare decisions used to be “your own business.”

“I hope the truckers do come to America,” he said, in no uncertain terms.

“It’d be great, but the thing is, it wouldn’t shut the city down because the government workers haven’t come to work in two years anyway,” Paul added. “I don’t know if it’ll affect D.C. It’d be a nice change. We’d actually have some traffic.”

“I hope they clog up cities,” Sen. Paul said of a truck convoy. “And we’re seeing a break in the dam now. Several Democratic governors are finally sort of relinquishing.”

“What they’re finding is, moms and dads are upset about this,” the senator continued. “They’re not just Republican. Everybody’s upset about this. They’re annoyed that their little kids have to be in a mask.”

A Facebook group for a US version of the trucker protest had amassed over 50,000 people before being suspended from the platform. 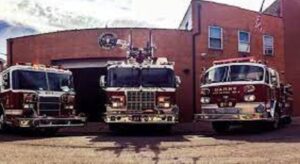