Cramer: 'This is just the beginning of their campaign to block legal purchases of firearms'

Republican Senators wrote to the financial services trade group to express concerns that a new merchant category for firearm sales could evolve into “de facto bans” on firearm purchases.

The letter, which was signed by ten Republican senators on the Senate Banking Committee, calls on the Bank Policy Institute, an advocacy and lobbying group that represents the financial industry, to push back against the decision to institute a new merchant category code for gun and ammunition stores which activists say could be used to track suspicious purchases:

We are writing regarding the concerning decision by three major credit card companies – Visa, Mastercard, and American Express – to implement a new merchant category code (MCC) for gun and ammunition stores. The move came after the International Organization for Standardization (ISO) decided to establish this controversial new MCC—which was proposed by a bank whose mission is to advance left-wing causes—against the recommendations of some ISO advisory council members. These decisions directly impact the Bank Policy Institute’s (BPI) members because, as issuing and acquiring banks, they play a major role in facilitating millions of debit and credit card transactions each day.

North Dakota Sen. Kevin Cramer’s message to BPI follows closely behind efforts at the state level by attorneys general to prevent the merchant category code from being implemented by the three major credit card companies.

“The creation of the new merchant category code was celebrated widely by liberal Democrats and gun-control advocates. They have made it clear this is just the beginning of their campaign to block legal purchases of firearms,” Cramer said in the letter. “In the face of this coming political pressure, we expect BPI’s members to demonstrate a commitment to process all transactions for the purchase of legal goods and services, including firearms, and maintain the financial privacy of consumers.”

According to Cramer and his Republican colleagues, a new merchant code that singles out firearm and ammunition sales could run the risk of creating infrastructure that allows payment processors and banks to create “de facto bans” on legal gun purchases in the future. “Let us be clear: banks should not misuse their power to hinder the ability of law-abiding Americans to exercise a constitutional right by creating de-facto bans on legal firearm purchases,” Senator Cramer wrote.

The Republicans further added that, despite vocal pleasure from Democrats such as Elizabeth Warren, the financial institutions should not see themselves as playing a role in “complex and contentious social and policy issues.” Instead, they say, that’s “the job of democratically-elected leaders, not unelected bank executives.”

“We urge BPI’s members to resist the political pressure to insert themselves into such issues, especially firearms. Instead, our nation’s largest financial institutions should focus on serving the needs of their customers without bias,” Cramer’s letter concludes. 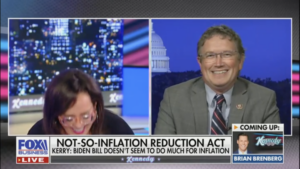 ‘He Called Me an A—hole More Than Once’ Rep. Thomas Massie Says Live On Fox