Through the lens of the Beltway’s funhouse, established elite experts are 'pro-democracy,' while people who question the conclusions of the establishment or their conflicts of interest are 'authoritarian'

Twisting the definitions of words has become all the rage in the primordial years of the new decade. “Democracy” this, “authoritarian” that — phrasing has become an inescapable fad practiced by today’s political reporters. At the end of the day, misusing words for political purposes has a storied history and is more than mere malapropism.

Take Washington Post columnist Dana Milbank’s assessment of today’s state of affairs: “My colleagues in the media are serving as accessories to the murder of democracy.” His rationale for saying this is the following: “After a honeymoon of slightly positive coverage in the first three months of the year, Biden’s press for the past four months has been as bad as — and for a time worse than — the coverage Trump received for the same four months of 2020.”

So if the media doesn’t suppress stories unflattering to the administration — essentially following Twitter’s lead suppressing the New York Post Hunter Biden story in October 2020 — the U.S. won’t be a democracy.

In today’s media discourse however, “democracy” has essentially become shorthand for “whatever political party I agree with.”

If the Republicans win, the U.S. won’t be a democracy. If the Democrats win, according to organizations aligned with the “secret bipartisan campaign” profiled by TIME Magazine, somehow democracy will be saved. The U.S. Democratic Party can call themselves The Greatest Democratic Defenders of Democracy on This Democratic Earth, but it doesn’t mean they’re any more committed to representing the interests of the people through representative government than the Republican Party or any other party for that matter.

So what does the word “democracy” actually mean?

According to Merriam-Webster’s historical and contemporary sources, there are no fewer than five meanings of democracy. Both the 1994 edition of their Collegiate Dictionary and the current Merriam-Webster website features “the principles and policies of the Democratic party in the U.S.” as the third definition of the word democracy. By that logic, a Republican Party victory in 2024 would be a defeat of democracy, as was every election the Republicans won going back to Abraham Lincoln.

However, the first definition, in both the 1994 and current web editions, is “a government in which the supreme power is vested in the people and exercised by them directly or indirectly through a system of representation usually involving periodically held free elections.” The “essential meaning” signified by the Merriam-Webster website is that a democracy is “a form of government in which people choose leaders by voting.” The definition and essential meaning implies that if representatives are voted in, regardless of political party, it’s a democracy.

True, historical and contemporary geopolitical landscapes have been littered with one-party dictatorships masquerading as democracies — Mexico throughout most of the 20th century and Nicaragua today come to mind.

Conversely, anti-communist republics with systems of government closer to that of Merriam-Webster’s first definition of democracy used or still use “Republic” with the “Democratic” moniker. West Germany was the Federal Republic of Germany. Anti-communist military dictatorships, most of which transitioned to representative democracy during or after the Cold War, used “Republic” as well — Lon Nol’s military dictatorship in Cambodia was known as the Khmer Republic, South Korea was and is the Republic of Korea, South Vietnam was the “Republic of Vietnam,” and Taiwan, then and now, is officially the Republic of China.

What Does Authoritarian Mean?

Both the 1994 and current Merriam-Webster dictionaries define authoritarian as either: “of, relating to, or favoring blind submission to authority” or “of, relating to, or favoring a concentration of power in a leader or an elite not constitutionally responsible to the people.” These definitions match up with the image of the Republican Party crafted by mainstream media figures. When you look at the policy stances of each party, however, the opposite is true. The expert authority of unelected public health and foreign policy bureaucracies in the U.S. federal government is defended today by Democrats, not Republicans who have frequently questioned various policies.

Through the lens of the Beltway’s funhouse, established elite experts are “pro-democracy,” while people who question the conclusions of the establishment or their conflicts of interest are “authoritarian.” That same elite — the one Reagan described nearly 60 years ago in his 1964 “A Time for Choosing” speech — look down on the citizenry and support restricting Americans’ Constitutional rights. After all, The View’s Joy Behar stated that the First Amendment and Second Amendment need to be “tweaked” with the advent of AR-15s. Parents who exercise their First Amendment rights in school board meetings have been accused of inflicting terroristic violence, according to a memo backed by Biden’s Attorney General Merrick Garland.

While the behavior of Biden administration officials and media figures clearly fit the Merriam-Webster definition of “authoritarian,” perhaps a different adjective would be more apropos. In the days of the Cold War, U.S. ambassador to the United Nations Jeane Kirkpatrick distinguished between “authoritarian” regimes, which described the anti-communist dictatorships that were aligned with the U.S. against the Soviets, and “totalitarian” regimes that characterized communist states. In her 1979 essay ,“Dictatorships and Double Standards” she stated:

“[Traditional autocrats] do not disturb the habitual rhythms of work and leisure, habitual places of residence, habitual patterns of family and personal relations. Because the miseries of traditional life are familiar, they are bearable to ordinary people who, growing up in the society, learn to cope. … [Revolutionary Communist regimes] claim jurisdiction over the whole life of the society and make demands for change that so violate internalized values and habits that inhabitants flee by the tens of thousands.”

The Merriam-Webster first definition of “totalitarian” in both the 1994 and current versions refers to the following:

a: “of or relating to centralized control by an autocratic leader or hierarchy : AUTHORITARIAN, DICTATORIAL especially : DESPOTIC”

b: “of or relating to a political regime based on subordination of the individual to the state and strict control of all aspects of the life and productive capacity of the nation especially by coercive measures (such as censorship and terrorism”

a: “advocating or characteristic of totalitarianism”

b: “completely regulated by the state especially as an aid to national mobilization in an emergency”

The 1994 version features an added clarification for 2c: “tending towards monopoly.”

Few policies fit the definition of totalitarian as snugly as the ensuing lockdowns and COVID restrictions that have essentially defined the politics of the current decade thus far. Republican-led states such as Florida and South Dakota have eschewed the “forever lockdowns” that have taken place in Democratic-controlled states like California, New York and New Jersey, among others. In short, the Republicans’ advocacy of preserving Constitutional freedoms and repudiating restrictions of movement are the literal opposite of authoritarian and totalitarian. But in the mainstream media’s world, straight out of Orwell’s 1984, authoritarianism is democracy and democracy is authoritarianism.

The idea that if the Republican Party wins the next presidential election, “we’re going to lose our democracy” has become an all-too-common refrain, a mantra uttered by pundits and politicians with an almost ritualistic reflex. The irony of all this is that the same individuals and organizations that purportedly abhor “authoritarianism” are fervent backers of lockdowns, COVID restrictions, and the politicians that support them. They want to restrict freedom of speech, assembly and religion, yet they’re somehow the standard-bearers of democracy. Meanwhile those who seek to preserve free speech are “authoritarian.”

The manipulation of discourse through words is nothing new as illustrated by totalitarian communists’ misuse of “democratic” to describe governments that claimed to represent the proletariat but actually merely replaced one elite with another ruling elite under the banner of the Communist Party. Dana Milbank’s remarks that unflattering coverage of the current administration is somehow murdering democracy speaks volumes of his own authoritarian mindset. The use of semantics to confuse and compromise an already divided American public will inculcate complacency and despair that will be difficult to overcome.

America’s freedom does not come from a dictionary — it’s written in both the letter and the spirit of the Constitution. 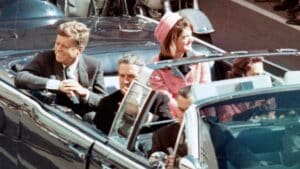