Second Bus of Illegal Immigrants Arrives in Philadelphia from Texas

“Texas is doing whatever it takes to provide relief to our overwhelmed border communities,” the governor said on Nov. 21 after roughly 100 illegal immigrants reached the Pennsylvania city. On the same day, approximately 8,400 migrants were bussed to Washington DC, over 3,800 to New York City, and about 1,200 to Chicago.

Abbott announced that, in total, more than 13,500 migrants have been moved to sanctuary cities since Texas began its bussing program.

Migrants who arrived in Philadelphia on Nov. 21 were either met by family members or taken to Lucerne Street Shelter via a SEPTA bus. The majority of the passengers were men. The bus originated in Del Rio, Texas.

Customs and Border Protection agents apprehended more than 52,000 illegal immigrants in the Del Rio sector during August, according to Breitbart.

“It is sad and outrageous that Governor Abbott and his administration continue to implement their cruel and racist policies using immigrant families, including children, as pawns to shamelessly push their warped political agenda,” Kenney said at a Nov. 16 press conference after the first bus arrived.

“It’s not just unproductive and disappointing, it’s downright irresponsible and callous to do this unannounced and [without] coordination, showing blatant disregard for the sanctity of human lives,” Kenney said.

The inclusion of Philadelphia in his sanctuary city bus routes reflects the Texas governor’s increased effort to get the federal government to take serious action to stop the flow of illegal immigrants into the country through border states.

In a Nov. 16 letter, Abbott charged Biden with failing to meet his Constitutional responsibility to protect the nation against invasion by not taking adequate action to stop illegal immigration at the US-Mexico border – resulting in “catastrophic consequences.”

“Under your watch, America is suffering the highest volume of illegal immigration in the history of our country,” wrote Abbott. “This past year, more than 2 million immigrants tried to enter the country illegally, coming from more than 100 countries across the globe.”

He noted the United Nations has declared the US-Mexico border the world’s deadliest land crossing.

“Texans are paying the price for your failure. Ranches are being ripped apart, and homes are vulnerable to intrusion,” the governor added. “Our border communities are regularly disrupted by human traffickers and bailouts. Deadly fentanyl is crossing the porous border to such a degree that it is now the leading cause of death for citizens between the ages of 18 and 45.”

Abbott berated Biden for refusing to visit the border and for supporting policies that forced Texas “to invoke our constitutional authority to defend ourselves.”

Under Abbott’s leadership, Texas has invested more than $4 billion into border security and enacted 15 new laws to stop human trafficking. 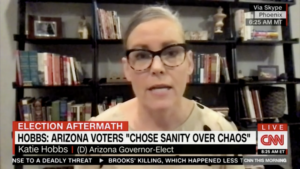