Jackson, 51, was asked by Sen. Dianne Feinstein if she agreed with statements made by Justices Brett Kavanaugh and Amy Coney Barrett about abortion law during their own hearings.

During his hearing, Kavanaugh said that Roe v. Wade “is settled as a precedent of the Supreme Court” and had been “reaffirmed many times.” Barrett had said that she would “obey all the rules of stare decisis.”

Jackson said that she agreed with those sentiments.

“Roe and Casey are the settled law of the Supreme Court concerning the right to terminate a woman’s pregnancy. They have established a framework that the court has reaffirmed.” https://t.co/cxOECWPc3g pic.twitter.com/4HRSTm7DIS

“Roe and Casey are the settled law of the Supreme Court concerning the right to terminate a woman’s pregnancy,” Jackson said. “They have established a framework that the court has reaffirmed, and in order to revisit, as Justice Barrett said, the Supreme Court looks at various factors because stare decisis is a very important principle.”

“It provides and establishes predictability, stability, it also serves as a restraint in this way on the exercise of judicial authority because the court looks at whether or not precedents are relied upon whether they’re workable, in addition to whether or not they’re wrong, and other factors as well,” she continued. “So I agree with both of those statements that you read.”

The Supreme Court is deciding a case on a Mississippi abortion law that will challenge Roe v. Wade in the coming months.

Pro-life activists have been hopeful that the conservative-majority court will vote in their favor.

During a hearing in December, Barrett said stare decisis was not an “inexorable command” and that, “there are some circumstances in which overruling is possible.”

According to reports, Kavanaugh also seemed “sympathetic” to the view that abortion issues are best left to the states, according to a report from The Hill. 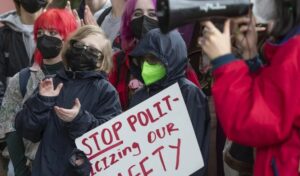