‘I’m not a biologist,’ she said when pressed by a Republican senator

The moment occurred during an exchange with Senator Marsha Blackburn (R-Tenn.), who cited an opinion from Justice Ruth Bader Ginsberg in the case of United States v. Virginia.

“Physical differences between men and women, however, are enduring,” Ginsberg wrote in the majority opinion.

“[T]he two sexes are not fungible; a community made up exclusively of one [sex] is different from a community composed of both,” Ginsberg continued, citing a 1946 Supreme Court decision.

After reading the quotes, Blackburn asked Jackson, “Do you agree with Justice Ginsburg that there are physical differences between men and women that are enduring?”

After a brief pause, Jackson said was not familiar with the quote or the case.

“So it’s hard for me to comment as to whether or not—” she said, before Blackburn cut her off.

When the senator asked if Jackson interpreted Ginsberg’s meaning of “men and women” as “male and female,” the SCOTUS nominee said she could not offer an interpretation without more knowledge about the case.

“I need to read the whole thing,” she said.

“Can you provide a definition for the word ‘woman’?” Blackburn countered.

“Not in this context,” Jackson said with a laugh. “I’m not a biologist.”

SEN. BLACKBURN: "Can you provide a definition of the word 'woman'?"

JACKSON: "I'm not a biologist" pic.twitter.com/i7Rg83z5Y4

“So the meaning of the word woman is so unclear and controversial that you can’t give me a definition?” Blackburn said.

“Senator, in my work as a judge, what I do is I address disputes,” Jackson replied. “If there is a dispute about a definition, people make arguments, and I look at the law, and I decide, so—”

“The fact that you can’t give me a straight answer about something as fundamental as what a woman is underscores the dangers of the kind of progressive education that we are hearing about,” Blackburn said.

The senator continued to recount how a “biological man” — referring to Lia Thomas — beat out biological women in a recent NCAA swimming championship.

“What message do you think this sends to girls who aspire to compete and win in sports at the highest levels?” Blackburn asked.

Jackson said she’s “not sure” what message Thomas’ victory sends.

“If you’re asking me about the legal issues related to it, those are topics that are being hotly discussed, as you say, and could come to the court,” she added.

During prior exchanges with GOP members of the Senate’s Judiciary Committee, Jackson has been questioned by Senators Ted Cruz (R-Texas), Josh Hawley (R-Mo.), and Tom Cotton (R.-Ark) regarding her views on Critical Race Theory, escalating crime rates, and the judge’s past handling of child pornography sentences.

If confirmed, Jackson would be the first black woman to serve on the Supreme Court of the United States. 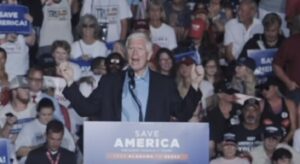