A bakery owner in San Francisco is calling out Democrat Rep. Nancy Pelosi, Mayor London Breed, and Gov. Gavin Newsom after being burglarized for the sixth time.

Le Marais Bakery is located in the Castro District on Sanchez Street and was robbed for the sixth time on December 26.

Patrick Ascaso, the bakery owner, posted photos of the damage on Facebook.

“They took everything from our Castro café last night, even our industrial safe from the basement,” Ascaso wrote.

Ascaso tagged Pelosi, Newsom, and Breed, adding, “if you cannot protect San Francisco’s small, local, family-owned businesses, how can our city thrive? We are heartbroken. We put so much heart into this location, we take such good care to make it beautiful and serve beautiful food and do our best on every level, and this is just too sad. It happens over and over and nothing changes. Please, San Francisco and California leaders, do more to care for our city and its small businesses. We deserve better. Our communities deserve better.”

In addition to stealing the industrial safe that was bolted to the ground, the burglars also ransacked the sales counter, stole iPads, and ripped out cables. “I don’t understand why they had to trash the place also,” manager Youssra Meknassi told CBS News. “I don’t get it. So everything here was a mess.”

“It’s like it’s not our first rodeo, you know,” Meknassi added.

The last break-in before this one was only a month ago.

Neighbor Patrick Freeman told CBS that what is happening breaks his heart. He also asked why police aren’t doing more to stop the crime spree in the city.

“These people are the best. I live right across the street,” Freeman said of the bakery.

“All the leaders of the city need to be pitching in,” Freeman continued. “You can’t keep having businesses getting broken into. Where are the police?”

The Daily Mail reports that “crime is up four percent in San Francisco in 2022, despite having recalled leftist reform District Attorney Chesa Boudin earlier in the year.”

“Larcenies and robbery thefts are up 4.9 and 9 percent, respectively,” the report added. 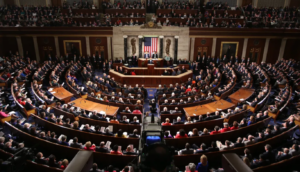