'Well, this is awkward,' tweeted Budweiser, which had exclusive rights to beer sales at the event

Alcohol will not be served at the World Cup in Qatar despite a previous agreement.

The sale of alcohol is strictly regulated because of the dominance of Islam in the Middle Eastern country. FIFA had previously stated alcohol would be sold in select areas of the eight stadiums used for the event.

Now, two days before the event is set to begin, the World Cup organizers have announced alcohol will only be sold in corporate areas of the stadium.

“Following discussions between host country authorities and Fifa, a decision has been made to focus the sale of alcoholic beverages on the Fifa fan festival, other fan destinations and licensed venues, removing sales points of beer from Qatar’s Fifa World Cup 2022 stadium perimeters,” the governing body of international soccer said in a Nov. 18 statement.

“Host country authorities and FIFA will continue to ensure that the stadiums and surrounding areas provide an enjoyable, respectful and pleasant experience for all fans,” the organization added.

“If Budweiser can’t have any visibility during games, FIFA could be breaching their multimillion dollar contract with Budweiser — a company that has had a relationship with FIFA since 1985,” notes CBS Sport.

FIFA thanked beermaker AB InBev, which owns Budweiser, for its “understanding and continuous support to our joint commitment to cater for everyone” attending the event.

Alcohol is not illegal in Qatar, but it is stringently regulated. Additionally, consuming alcohol in public and public intoxication are strictly forbidden.

“As partners of FIFA for over three decades, we look forward to our activations of FIFA World Cup campaigns around the world to celebrate football with our consumers,” AB InBev told CNBC in an emailed statement. “Some of the planned stadium activations cannot move forward due to circumstances beyond our control.”

AB InBev has said the tournament and the nation’s laws regarding alcohol are an opportunity to promote Bud Zero.

“There will be millions of people watching the games, so it’s a sizable trial opportunity for sure,” Marcel Marcondes, Anheuser-Busch InBev’s global chief marketing officer, previously said in an interview. “We’re working with the local authorities to make sure that we will be absolutely compliant with all the specificities of the regulation.”

Qatar will play Ecuador in the first World Cup game when the tournament begins on Nov. 20. The event end on Dec. 18. 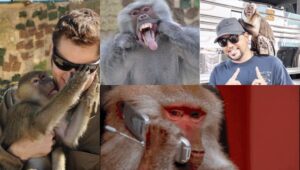 Owner of 'Most Famous Baboons on the Internet' Alleges Hilton Hotel and California City Are Conspiring to Steal His Family’s Land, Displace His Animals