After 15 years of denials, a California board recommended Sirhan Sirhan for parole

Sirhan shot Kennedy at The Ambassador Hotel in California in 1968. The New York senator had just won the state’s Democratic presidential primary and was considered to be the party’s likely nominee. He and five other people were shot as they made their way through the hotel’s kitchen. In the moments after the shooting, Sirhan was tackled to the ground while holding a gun.

After his conviction in 1969, the California Supreme Court sentenced him to life with the possibility of parole after ruling that the death penalty was unconstitutional in 1972.

Sirhan was denied parole for over 15 years because he did not show “adequate remorse or understand the enormity of his crime,” per AP News. Last week, “the two-person panel said he appeared to be a different man, even from his last hearing in 2016, and granted the 77-year-old prisoner parole.”

“The board found Sirhan no longer poses a threat to society, noting that he had enrolled in more than 20 programs including anger management classes, Tai Chi and Alcoholics Anonymous meetings, even during the coronavirus pandemic.”

Ultimately, the governor will decide if Sirhan can be released.

Out of RFK’s nine surviving children, two have spoken out in support of the board’s decision. Douglas Kennedy told the board members that he was “moved to tears” by Sirhan’s remorse and asked that he be released from prison provided that he was not a threat to anyone else.

“I’m overwhelmed just by being able to view Mr. Sirhan face to face,” he said in the virtual hearing. “I’ve lived my life both in fear of him and his name in one way or another. And I am grateful today to see him as a human being worthy of compassion and love.”

Robert F. Kennedy, Jr. wrote in a letter to the board saying, “While nobody can speak definitively on behalf of my father, I firmly believe that based on his own consuming commitment to fairness and justice, that he would strongly encourage this board to release Mr. Sirhan because of Sirhan’s impressive record of rehabilitation.”

Six of the Kennedy siblings released a statement asking Governor Gavin Newsom to keep Sirhan in prison by reversing the board’s decision. They said they “adamantly oppose” Sirhan’s possible release adding that he “committed a crime against our nation and its people.”

They believe the ruling “ignores the standards for parole of a confessed, first-degree murderer in the state of California.”

Please read and share statement from my family regarding today’s recommendation of parole for Sirhan Sirhan. pic.twitter.com/60klc1fHxU

Sirhan was 24 when he shot Kennedy. A change in California law has made it easier for prisoners who committed crimes at an early age to get parole, according to NPR. This was Sirhan’s 16th attempt to get parole.

Sirhan, a Palestinian refugee from Israel, could face deportation to Jordan if released. 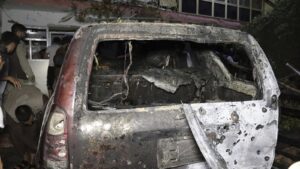 Nine Members of One Family, Including Six Children, Killed in US Drone Strike Near Kabul Airport