Republicans have a nine point lead in their quest to retake control of Congress in the November midterms, according to a newly released poll.

According to a generic ballot poll conducted by Rasmussen Reports, if the elections for Congress were held today, 48 percent of likely voters would choose the Republican candidate, while 39 percent say they plan to vote for the Democrat.

Just four percent told the pollsters that they would vote for “some other candidate,” and nine percent are not sure.

“Republicans have gained one point since last week, when they led 48%-40%. The GOP has led the Generic Congressional Ballot all year,” the pollsters said in a report included with their findings.

Helping the GOP is a 17-point lead among independents and more loyalty from their own base. The poll found that while 86 percent of Republicans will vote for their party’s congressional candidates, only 78 percent of Democrats said the same.

“Among voters not affiliated with either major party, 44% would vote Republican and 27% would vote Democrat, while 10% would vote for some other candidate and 19% are undecided,” Rasmussen reported.

Republicans are also closing the “gender gap” amongst their voters, with 47 percent of women now preferring Republican candidates — a three percent gap from men who are at 50 percent. The pollsters noted that the gap was six points last week, and nine points two weeks ago.

Rasmussen is tracking the generic poll through the election and are updating weekly on Fridays at 10:30 a.m. Eastern through November.

As Timcast reported the same day the poll was released, more than half of young people in the country disapprove of the job Joe Biden is doing as president.

The Quinnipiac Poll found that 54 percent of Americans between the ages of 18 and 34 disapprove of Biden’s handling of the presidency. Just 22 percent of the same age group approves of Biden.

Republican and Democrat voters over the age of 65 are the most likely to support the current president, with 43 percent approval and 52 percent disapproval, respectively.

The survey of 2,500 U.S. Likely Voters was conducted on June 5-9, 2022 by Rasmussen Reports. The margin of sampling error is +/-2 percentage points with a 95% level of confidence. Field work for all Rasmussen Reports surveys is conducted by Pulse Opinion Research, LLC. See methodology. 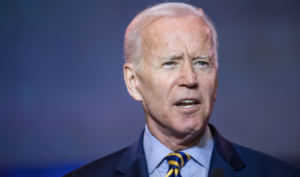