NFTs, or Non-Fungible Tokens, are most often art or music sold utilizing blockchain technology. Each digital asset carries a unique identifier that allows you to verify its origin and authenticity. It is also a unique tool to track usage and transactions when the assets are sold, resold, displayed, and shared.

The NFT Masters’ is selling include a digital copy of the cover art of “Zero to One,” a book he co-authored with tech billionaire Peter Thiel. Buyers will also receive a signed copy of the actual book, according to Masters’ website.

Masters currently serves as the chief operating officer for Thiel Capital under Peter Thiel, a co-founder of PayPal who has an estimated net worth of $9.2 billion. He was ranked 273rd on the Bloomberg Billionaires Index and is best known as a venture capitalist how focuses his investments in cutting-edge technology, like NFTs.

“This is the first NFT we’re issuing to help share the book’s cool history, and to help raise money for my U.S. Senate campaign, so we can help use Zero to One thinking to save America from the brink of destruction,” Masters wrote when announcing the NFT.

Master and Thiel are releaseing a limited 99 NFTs, a process called minting. According to the official website, each NFT will be sold for $5,800. Besides the digital art and the signed copy of his book, he also includes an invitation to a private party hosted by himself and Thiel.

Masters said the NFTs were meant to attract “less conventional political donors” and expand the reach of his campaign.

Masters is not alone in this approach. Many major brands such as Gucci, Louis Vuitton and Burberry have created NFTs that correspond to products or experiences to engage with a new audience.

As of this writing, 58 of the NFTs have been sold, according to a recent tweet from Masters.

Update: 58 of these are happily claimed (in less than 12 hours!)

41 remain available. I’ll update when we hit 80 and again at 95 and 99. (Of course, if you happen to donate after the 99th NFT is claimed, and you want a refund, will gladly issue one.) https://t.co/FUXnibrFS6

Masters is running his campagn in a crowded Arizona Republican primary. If he secures his spot, he will face incumbent Arizona Democratic Sen. Mark Kelly in the final election. 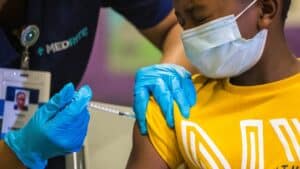