Congressman Greg Steube has reportedly suffered serious injuries after falling from the roof of his Florida home late Wednesday afternoon and was found by the congressional aide of his colleague Rep. Vern Buchanan.

Peter Schorsch, the publisher of Florida Politics, was the first to report on the injury. Still, while Steube’s office has acknowledged that some incident had occurred, they did not elaborate beyond saying he had sustained “several injuries” and that his office would provide updates “when possible.”

“Congressman Steube was involved in an accident on his property late this afternoon and has sustained several injuries,” his staffer tweeted from his official account. “We will provide additional updates when possible. Please pray for the Congressman and his family.”

Congressman Steube was involved in an accident on his property late this afternoon and has sustained several injuries. We will provide additional updates when possible. Please pray for the Congressman and his family.

Florida Politics provided the following information about the incident:

The Sarasota Republican was reportedly doing routine home maintenance and apparently fell from his roof about 25 feet to the ground. Steube was found at his home by a staffer to U.S. Rep. Vern Buchanan, a Longboat Key Republican. Buchanan and Steube represent adjacent congressional districts and serve together on the House Ways and Means Committee. Buchanan’s staffer was actually in the neighborhood doing part time delivery work.

Steube first won election to Congress in 2018, defeating two other Republicans in a high-profile primary, then easily winning the General Election in the deep red district. He quickly developed a reputation as one of the most conservative members of Florida’s congressional delegation. In particular, he has made gun rights and the Second Amendment key parts of his political agenda.

Now being told that it was a part-time aide for @VernBuchanan, Steube’s congressional neighbor, who moonlights as an Amazon delivery driver who discovered Steube in this situation. https://t.co/7BaYEsPPLx

Several of Steube’s colleagues in Congress responded with words of support:

Please join Ann and me in wishing Greg a speedy recovery. We're keeping him and the Steube family in our prayers. 🙏 https://t.co/S2YFtLMNxN

Terrible news. Praying for the Congressman and his family. https://t.co/2JnmGgt4nx

Before entering the political arena, Steube served in the Army as an airborne infantry officer and as a JAG corps officer. He first held office in Florida’s state legislature where, in both chambers, he served a combined eight years. 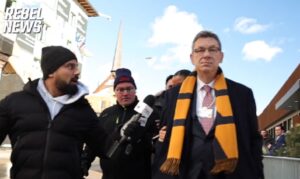