Republicans will leave the Commission on Presidential Debates following a unanimous vote from the national committee.

Ronna McDaniel, the chairwoman of the Republican National Committee, released a statement following the April 14 vote claiming groups that run the debate are biased.

“Debates are an important part of the democratic process, and the RNC is committed to free and fair debates,” McDaniel said. “The Commission on Presidential Debates is biased and has refused to enact simple and commonsense reforms to help ensure fair debates including hosting debates before voting begins and selecting moderators who have never worked for candidates on the debate stage.”

The CPD is a nonprofit formed in 1987 to “sponsor and produce the quadrennial general election debates and to undertake research and educational activities relating to the debates.” Between 1988 and 2020, the CPD oversaw all presidential debates.

The commission has not yet made a public statement regarding the RNC’s withdrawal.

The Republican governing body emphasized the vote did not signal their opposition to debates completely.

The organization would be open to finding a “newer, better debate platform” not regulated by the CPD, which the RNC believes “does not serve the interest of the American people.”

“The RNC withdrawal does not mean that presidential and vice presidential debates will no longer happen, but that Republican candidates will no longer participate in commission debates,” reports Business Insider. “A possible outcome would be campaigns directly engaging with each other to set up debates going forward, which would mark a significant shift in the decades-old tradition of commission-sponsored debates.”

The decision comes after a year of consideration.

Among their objections, the Republican officials found that “waiting until 26 states had begun early voting before hosting the first presidential debate in 2020” and “selecting a moderator in 2020 who had once worked for Joe Biden” signal the CPD’s inability to maintain nonpartisanship. 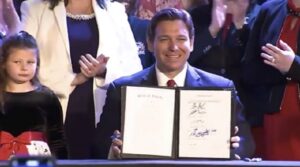