U.S. Rep. Michael McCaul: “Now is the time to use all of the tools the U.S. government has ... to root out the full truth of how this virus came to be”

The House Foreign Affairs Committee Lead Republican released an addendum detailing evidence that the Wuhan Institute of Virology (WIV) was the source of the COVID-19 outbreak and there was an alleged effort to cover it up.

On Monday, Representative Michael McCaul dismissed the theory that the virus originated from a wet market in Wuhan.

“It is our belief the virus leaked sometime in late August or early September 2019,” McCaul wrote. “When they realized what happened, Chinese Communist Party officials and scientists at the WIV began frantically covering up the leak, including taking their virus database offline in the middle of the night and requesting more than $1 million for additional security.”

He added: “We know gain-of-function research was happening at the WIV and we know it was being done in unsafe conditions. We also now know the head of the Chinese CDC and the director of the WIV’s BSL-4 lab publicly expressed concerns about safety at PRC [People’s Republic of China] labs in the summer of 2019.”

The addendum cites the sudden illness of athletes at the Military World Games in Wuhan in October 2019, satellite imagery showing an uptick in hospitalizations near the WIV in September and October 2019, and the installation of a bioweapon’s expert to the WIV’s Biosafety Level 4 lab as evidence for the leak.

The report calls for Peter Daszak to be summoned regarding the lab’s action in late 2019. Allegedly, the president of New York-based EcoHealth Alliance and lead scientist Shi Zhengli, known as the Wuhan lab’s “bat woman,” lied about the origins and then dismissed the lab-leak theory as a crackpot conspiracy, reports The New York Post.

The report argues that “it is self-evident that Shi and her colleagues, with funding and support from Daszak, were actively genetically manipulating coronaviruses and testing them against human immune systems in 2018 and 2019, before the beginning of the pandemic.”

In statements alongside the release of the report, McCaul asked for Congress to pass legislation that would sanction scientists at the Wuhan lab and Chinese Communist Party officials who obstructed efforts to respond to the pandemic quickly and effectively.

“While scientists and intelligence officials have increasingly coalesced around the theory that the pandemic outbreak’s likely epicenter was the Wuhan lab — in addition to the theory that the chain of the virus stemmed from human contact with an infected animal — they have downplayed the suggestion that the virus was genetically modified,” per The Hill.

“The Biden administration has already — working through the WHO and with the G-7 and with other countries — used diplomacy and tried to urge the Chinese to cooperate. They’ve given us their answer, their answer is no,” said Anthony Ruggiero, a senior fellow at the Foundation for Defense of Democracies, per Digital Journal.

Representative McCaul has served in Congress on behalf of the 10th district of Texas since 2005. He previously served as the Chairman of the House Committee on Homeland Security.

Currently, over 4.2 million people have died globally from the virus. There have been 198 million cases documented worldwide and over 4 billion doses of the vaccination have been administered. 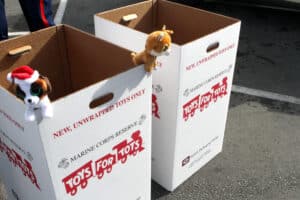 Toys For Tots Preparing for Shortages Due to Supply-Chain Gridlock