South Carolina Rep. Jeff Duncan is the latest of several politicians to use the viral slogan

Speaker of the House Nancy Pelosi reintroduced a mask mandate in the House in July following recommendations from the Center for Disease Control and Prevention regarding the spread of the COVID-19 Delta variant.

“Following the announcement, the attending physician for Congress, Dr. Brian Monahan, said in an alert to House members Tuesday that people are required to wear masks again inside the chamber and office buildings and in committee meetings,” per NCB News.

Many members of the House denounced the reinstatement and even called for Pelosi’s removal. Pelosi, in turn, blamed Republicans for not getting vaccinated despite having access to the vaccination.

On Oct. 25, Congressman Duncan caught online attention when he walked on the House floor wearing a “Let’s Go Brandon” mask.

Punchbowl News founder Jake Sherman was the first to tweet about Duncan’s mask, which the Representative then responded to with a mask-wearing emoji.

Spotted at House votes: GOP Rep. Jeff Duncan of SC wearing a mask with a phrase that Republicans are using in place of F*** Joe Biden. pic.twitter.com/0rTSz6LwNV

“Not only does Jeff Duncan not deliver for the people of the third district — I cannot think of a thing he has truly done — he now sports a vulgar slogan on his mask and walks off the floor!” she wrote. “The hypocrisy of the Faith and Freedom BBQ is exposed!”

Duncan’s mask is not the slogan’s first appearance in Congress.

“On October 21, Florida congressman Bill Posey ended his speech on the House floor with ‘let’s go Brandon’ after speaking out against Biden’s ‘Build Back Better’ bill,” per Newsweek.

“People are understandably frustrated. Actually, they’re very angry. And they’re not going to sit back and take it much longer,” Posey said in the moments preceding.

Ted Cruz reposted a Tik Tok video of him saying the slogan while at a Houston Astros game with a shrugging emoji. 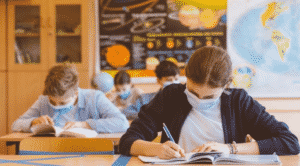