Republican Rep. Greg Steube has introduced legislation to end the taxpayer funding of National Institutes of Health experiments on dogs.

In his announcement of the bill, Rep. Steube promised that it will “cut every dime of NIH’s federal funding for ruthless dog experiments.”

The Protecting Dogs Subjected to Experiments Act legislation will cut every dime of NIH’s federal funding for ruthless dog experiments.https://t.co/M58WXcde7W

“The NIH uses over $40 billion in taxpayer dollars annually to fund its research projects, including many recent, cruel examples using dogs. Americans don’t want to enable the heinous abuse inflicted on puppies and dogs in the name of research. My legislation will cut every dime of NIH’s federal funding for these ruthless dog experiments,” said Rep. Greg Steube.

The text of the bill states that it will “prohibit the provision of Federal funds to the National Institutes of Health for the purposes of conducting biological, medical, or behavioral research involving the testing of dogs.”

Over the last few years, WCW has exposed NIH funding painful sand fly experiments on dogs in Tunisia, the de-barking of puppies in unnecessary drug tests, NIH’s $2 million cocaine experiments on puppies, and NIH’s ties to dog breeder Envigo — who recently had to surrender 4,000 beagles due to over 70 animal welfare violations at the facility.

Beagles are frequently used in painful animal experiments because of their docile and forgiving nature, even to those who harm them.

As Timcast previously reported, earlier this year, WCW obtained exclusive documents via Freedom of Information Act (FOIA) requests revealing that one NIH lab has purchased over seven dozen beagles from Envigo since 2019 alone, some as young as one year old, at a cost to taxpayers of between $1,000 and $1,500 per dog.

The documents detailed shocking experiments including one in which the vivisectors took the young dogs, cut their throats open, and implant pneumonia-causing bacteria directly into their lungs.

The NIAID-funded beagle tests were paid for out of a larger $32.6 million taxpayer-funded contract, though it is currently unclear how much of that was spent on tests using dogs.

“We applaud Congressman Steube for introducing the Protecting Dogs Subjected to Experiments Act and for his outstanding work to ensure taxpayers aren’t forced to pay for cruel, unnecessary and wasteful NIH testing on puppies and dogs,” Justin Goodman, Senior Vice President of Advocacy and Public Policy at WCW told Timcast.

The statement continued, “as White Coat Waste Project’s #BeagleGate investigations have revealed, NIH-funded white coats are wasting millions of taxpayer dollars to inject puppies with cocaine, de-bark and poison dogs, infest beagles with flies and ticks, and force dogs to suffer septic shock. A supermajority of Americans across the political spectrum want Congress to cut NIH’s wasteful spending on dog experiments. The solution is clear: stop the money. stop the madness.” 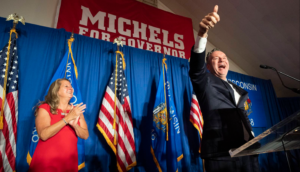