As people increase the number of pets in their homes and shortages and supply chain issues leave grocery store shelves thin and barren, experts are now warning that pet food stock may remain low through 2023.

There has been an increased number of animal adoptions during the pandemic, so people are buying more pet food.

The Wall Street Journal reports, “pet-food sales at supermarkets grew 6.9% over the past 52 weeks ended Nov. 27, compared with 2.3% for food overall, according to research firm NielsenIQ.”

“The crunch is putting some pet owners in a bind — particularly those whose pets require prescribed food or have dietary restrictions. Dogs and cats often get attached to a specific brand or flavor of food, pet owners said, and can have physical reactions if forced to change,” the report explains.

Pet food companies are now struggling to find ingredients for their recipes to accommodate the increased demand.

“J.M. Smucker Co. notified retailers in November that it would limit shipments of some pet-food products through January 2023, citing transportation challenges with the supply of wet food — which typically uses imported ingredients,” the report continued. “Freshpet Inc., which makes refrigerated dog food and dry food for cats, is expanding its suppliers of turkey and plastic film, used in packaging, and has added production capacity, said Chief Executive Billy Cyr. But equipment for new production lines is getting held up at ports, and construction materials are running low, he said.”

The empty shelves are also causing people to panic buy and stockpile their pet’s favorite meals — which in turn, increases the shortages.

Dan Lavalle, manager of Pet World in Natick, Massachusetts, told local station WCVB that he has been scrambling to keep shelves full.

“We’re on the phones daily with our suppliers and they’re trying to get the inventory as best as they can,” said Lavalle.

“Try to give your animal some different options to try so you’re not stuck one particular flavor. Get them to try another flavor by that company,” Lavalle suggested.

Eric Sives, a sales representative for Farmina Pet Foods, told the station that they are trying their best, but that shipping containers with the supplies they need are “stuck out in the ocean.”

“It’s tough on everyone, so we’re doing our best to try to get product in a timely manner. But it’s a matter of containers being stuck out in the ocean,” Sives said. 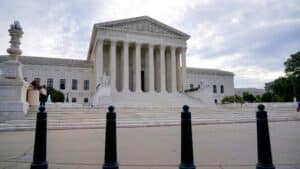