Rep. Marjorie Taylor Greene Tells British Reporter to 'Go Back to Your Own Country,' After She Appeared to Advocate for Gun Control

Rep. Marjorie Taylor Greene did not hold back as she clashed with a British reporter over gun rights in America during a press conference on Wednesday.

Greene ended up telling the reporter to “‘go back to your own country.”

A British journalist, who Timcast has not been able to identify at this time, pressed Greene on the rate of gun violence in America versus in the United Kingdom.

“When British press wants to argue about our God-Given American gun rights, my answer is: ‘go back to your own country,'” Greene tweeted with a video of the exchange.

When British press wants to argue about our God-given American gun rights, my answer is: “go back to your own country.” pic.twitter.com/QrcA9Apbet

During the press conference, Greene had stated “It’s our job to defend the Second Amendment.”

The journalist replied, “We don’t have guns in the U.K., that is true, but we don’t have mass shootings either. And our children aren’t scared to go to school.”

“You have mass stabbings, lady. You have all kinds of murder and you’ve got laws against that.” Greene responded.

“Nothing like the same rates here,” the journalist snapped back.

Greene, never one to shy away from confrontation, responded bluntly, “well, you can go back to your country and worry about your no guns, we like ours here.”

Greene’s spat was similar to remarks made by then-President Donald Trump while speaking at the National Rifle Association conference in 2018.

“They don’t have guns, they have knives – there’s blood all over the floors of this hospital.”

Back in May, President Donald J. Trump said he had read that a central London hospital was “a war zone for horrible stabbing wounds” – another one of our most watched videos this year. pic.twitter.com/MosE06mPWF

“That’s right, they don’t have guns, they have knives,” Trump said, telling a story of bloody hospital floors.

According to Statista, there were 235 homicides involving a knife or other sharp instrument in England and Wales during the reporting year ending March, 2021. Overall, there were 594 homicides.

On Tuesday, the senate voted to advance a gun control bill with the support of 14 Republicans.

As Timcast previously reported, Democrats have indicated that they expect the bill to reach the House for a vote by the weekend. 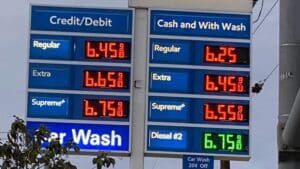