The North Carolina politician is the youngest member of Congress

According to the caucus’s Facebook page, “the House Freedom Caucus gives a voice to countless Americans who feel that Washington does not represent them. … We support open, accountable, and limited government, the Constitution and the rule of law, and policies that promote the liberty, safety and prosperity of all Americans.”

Arizona Representative Andy Biggs will step down as the caucus’s chairman due to term limits. His possible replacements include Reps. Scott Perry of Pennsylvania, Rep. Warren Davidson of Ohio, and Rep. Ralph Norman of South Carolina.

In his announcement, Cawthorn said he was “proud to join the Freedom Caucus” and vowed to “work relentlessly to defend the will of the American people” who elected the members of the caucus.

“Liberty and freedom must be defended in the People’s House by patriots who are unafraid to challenge the status quo and stand for what is right. I ran to change the way Congress does business. That means upholding promises made to the American people, not selling out to the Swamp. Although I have only been in Washington for a short period of time, I have learned that the fighters must stand together and defend America.”

A self-described constitutional conservative, the first-term North Carolina representative is the youngest member of the 177th Congress.

Cawthorn caught the attention of President Donald Trump after he beat Lynda Bennett, who the President endorsed in June of 2020. Trump congratulated him in a tweet.

“Cawthorn got an invite to speak at Trump’s Republican National Convention where he made a splash by dramatically standing up out of his wheelchair,” per Fox News.

Cawthorn is frequently in the media for the speeches he makes on the House floor. On Oct. 26, he called Dr. Anthony Fauci a “demon doctor” and called for his investigation.

“Dr. Fauci has forsaken his Hippocratic oath and exchanged it for the mantle of unchecked power,” he said. “His policies shuttered the U.S. economy, drove our country into financial upheaval and violated the rights of millions of Americans.” 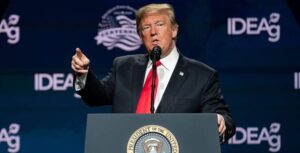