Fully vaccinated and boosted Rep. Liz Cheney has announced that she tested positive for COVID-19 on Wednesday.

The congresswoman said in a statement that she is experiencing “mild symptoms.”

“While I am fully vaccinated and boosted, I received a positive test result for COVID-19 early Wednesday morning. I am currently experiencing mild symptoms and will follow the CDC’s guidance as I continue to work on behalf of the people of Wyoming,” Cheney said in a statement.

Cheney also offered prayers for the victims of the Texas school shooting, which left 19 children and two adults dead.

“I continue to pray for the people of Uvalde, TX, especially the mothers and fathers who have lost their little children in this horrific attack,” Cheney wrote.

Cheney delivered remarks on Sunday after accepting the Profile in Courage Award at the John F. Kennedy Presidential Library in Boston.

The Wyoming Republican has become a controversial figure on the right after voting to impeach former President Donald Trump and serving on the January 6 committee investigating the protest at the Capitol.

The Wyoming Republican Party voted to formally censure Cheney in February of 2021 and removed her from her role as conference chair the following May. The state party later voted to no longer recognize her as a Republican at all.

“It’s laughable to suggest Liz is anything but a committed conservative Republican,” said Jeremy Adler, a Cheney spokesperson, told the Casper Star Tribune in response to the resolution passing. “She is bound by her oath to the Constitution. Sadly, a portion of the Wyoming GOP leadership has abandoned that fundamental principle, and instead allowed themselves to be held hostage to the lies of a dangerous and irrational man.”

Hageman is leading in recent polls. 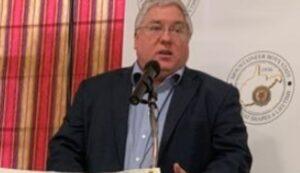