Rep. Alexandria Ocasio-Cortez was confronted by anti-war protesters during a Q&A event on Thursday night.

The event was held at Bronxdale High School in the Bronx.

We’re hosting a town hall tonight! Join us at 6 pm at Bronxdale High School. If you can’t make it in person, you can watch our livestream on Twitter!

In a video posted by Jose Vega, one of the protesters, Rep. Ocasio-Cortez was confronted about her votes to fund Ukraine.

“My friend @Noggatone and I confronted Congresswoman @AOC on her support for Nuclear War and Ukrainian Nazis,” Vega tweeted. “I call her out for being a coward in the face of the party that will push us all into Nuclear war right now. Will she stand up like @TulsiGabbard and fight for peace?”

My friend @Noggatone and I confronted Congresswoman @AOC on her support for Nuclear War and Ukrainian Nazis. I call her out for being a coward in the face of the party that will push us all into Nuclear war right now. Will she stand up like @TulsiGabbard and fight for peace? pic.twitter.com/aQiQvQSWIN

“Tulsi Gabbard, she’s left the Democratic Party because they are war hawks,” the protester shouted. “You ran as an outsider! Yet, you’ve been voting to start this war in Ukraine.”

Vega jumped in and asserted, “you voted to mobilize and send money to Ukrainian Nazis!”

Throughout the event, other hecklers could be heard periodically interupting the congresswoman with their concerns and complaints.

Vega told Timcast that he is not right or left-wing, but a “normal dude” who works for Diane Sare’s independent Larouche Senate campaign.

“Congress is in recess for the next month until after the elections,” Vega told Timcast. “Everyone should find their representative and tell them that there’s only one thing on the table — and it’s nuclear war. People need to stand up no matter what they believe and speak out against the war mobilization.”

While confronting the congresswoman, Vega had said that he had previously been rooting for her. He later posted an email that he had sent to her in 2018 as proof.

For those who think I’m playing up “believing In her.” Here’s an email I wrote to her in 2018 while my apartment was in literal shambles https://t.co/KXMvbDinZE pic.twitter.com/HbKr04Zq9s

(2/2) Ironically, the other congressman who was present @hakeemjeffries also KNOWS about the nazi’s in Ukraine because he wrote a letter about it to Congress. Read that here! https://t.co/UtvxRxobEE

“Congressman! You’re a hypocrite because you are funding neo-Nazis in Ukraine!” Vega shouted. He noted that the Azov Battalion are wearing the same Black Sun symbol that the Buffalo shooter used, as well as the person who attempted to assassinate the Vice President of Argentina.

“You say you want to advance the black cause, but you are funding the same people who kill in the name of white supremacy!” Vega shouted before asking, “where’s the $50 billion for the Bronx?”

Vega also went viral nearly a year ago for interrupting Vice President Kamala Harris as she gave a speech in New York.

Vega was shouting at Harris about the “right to infrastructure.”

“You are right, brother,” Harris replied.

“I am right about that,” Vega shouted back.

“I know you are, and how about you and I talk about that –” Harris said. “You and I will talk after I give my comments, and I’m happy to talk with you.”

Vega was then escorted out of the building by security. 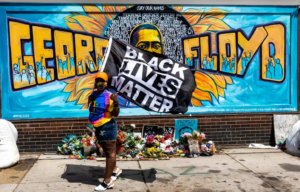