Rapper Fontrell Antonio Baines, 33, has been sentenced to over six years for his defrauding of pandemic assistance programs.

Baines has been ordered to pay over $700,000 in restitution and will spend the next 77 months behind bars.

Baines, who performs under the stage name “Nuke Bizzle,” had previously uploaded a music video where he rapped that while other hustlers had to “sell cocaine,” he only had to “file a claim.”

The song, titled “EDD,” is a direct reference to the institution he was defrauding: the California Employment Development Department.

Between July and September 2020, Baines “exploited” provisions of the CARES Act, specifically the Pandemic Unemployment Assistance program, in order to obtain hundreds of thousands of dollars “to which he was not entitled,” according to the Justice Department.

Baines would use the identities of individuals who had tangential ties to the state — like students who no longer reside in the state — in order to receive prepaid debit cards at addresses to which he had access.

In total, Baines has admitted to filing 92 fraudulent claims for Pandemic Unemployment Assistance. According to the Department of Justice, had Baines been successful in all of his attempts, he would have netted approximately $1.2 million. Ultimately, Baines got away with an estimated $704,760 according to a press release from the Justice Department which further described the lengths the rapper took to fulfill his scheme:

Baines defrauded the program to obtain unemployment benefits administered by the EDD in the names of third parties, including identity theft victims. The applications for benefits also included false statements about the work histories and in-state residences of the named applicants. Through his fraud, Baines turned the taxpayer-funded program into “his personal piggybank,” according to a sentencing memorandum filed by federal prosecutors.

Baines has multiple prior convictions including trafficking and possession of narcotics and possession of a firearm as a convicted felon. His arrests stretch from Tenessee to Nevada and ended in his home in Hollywood Hills in October of 2020. He has been held in federal custody since, pleading guilty to possession of oxycodone in August of this year in an unrelated case. 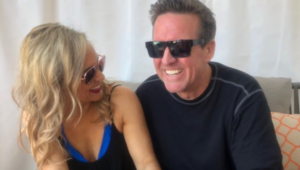