'Now, McConnell! Now, Schumer! Now, Pelosi And Vixen! On Biden! On Stupid! On Dumber And Blitzen!'

On Tuesday evening Kentucky Senator Rand Paul recited a politically-themed rendition of The Night Before Christmas that took jabs at the 2023 omnibus bill.

“‘Twas the week before Christmas, and through the Senate and House not a creature was stirring, not even a mouse,” Paul said. “The earmarks were hung by the chimney with care in hopes that Saint Nicholas soon would be there.”

“While visions of pork danced in their heads, no budget was found. Just mischief and debt,” Paul added. “While the taxpayers hung their poor heads and wept.”

🎄 I wrote and performed my own scary version of 'Twas the Night Before Christmas 🎄 Enjoy! pic.twitter.com/IHI0uNyW0N

Paul continued his rendition by criticizing Senators and other elected officials in supporting the 4,000 page omnibus bill.

“Now, McConnell! Now, Schumer! Now, Pelosi and Vixen!” the Kentucky senator said directly naming Senate Majority and Minority Leaders Chuck Schumer, and Mitch McConnell respectively along with Speaker of the House Nancy Pelosi. “On Biden! On stupid! On dumber and Blitzen!” Paul continued, criticizing President Joe Biden. “To debt! To Bankruptcy! To free money for all!”

“This spending season, instead of naughty and nice, Santa brought everyone something regardless of price,” the Kentucky Senator said, referencing “earmarks” and “appropriations” within the bill.

“A wink of his eye and a twist of his head, he said ‘not to worry, there’s always the Fed,'” Paul said, referring the Federal Reserve and further criticizing aid to Ukraine. “Don’t worry about leaving the budget a mess, Democrats have given you 87,000 agents of the IRS.”

“Happy bankruptcy to all, and to all a good night,” Paul concluded.

Included in the $1.66 trillion legislation for the 2023 fiscal year, originally introduced by the Senate Tuesday night, was $2 million to renovate a Planned Parenthood location, along with $45 billion in further Ukraine aid.

The bill also allocates $785 million in Federal Emergency Management Agency (FEMA) for sheltering, transporting, and feeding illegal immigrants. The proposed $150 million increase from 2022 is in response to a recorded 2.3 million migrant encounters in the last fiscal year.

Paul releases yearly “Festivus” reports detailing what the he describes as “government waste.”

In 2021, Paul reported over $52 billion allocated for COVID-19, Afghanistan, and other miscellaneous spending.

“It seems like just yesterday when the national debt was $20 trillion, but now the U.S. has managed to breeze past $28 trillion!” Paul wrote last year. “Unsurprisingly, it managed to keep spending money we don’t have on things we don’t need. … Only a few years ago, we could have balanced the budget by cutting only one penny off every dollar spent by the Federal government — now, we need to cut 5.”

The Kentucky Senator has yet to release his 2022 “Festivus” report. 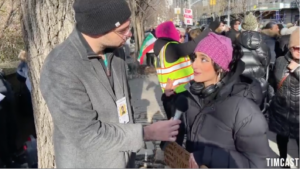 WATCH: Protestors Gather in NYC to Oppose Executions in Iran