The pro-abortion activists who gathered outside the homes of conservative Supreme Court justices on Saturday evening appear to have violated a federal statute that is very similar to the one many January 6 protesters remain held on over a year later.

The protests were organized by a group called Ruth Sent Us, along with one of Justice Brett Kavanaugh’s neighbors, a woman named Lacie Wooten-Holway — though it is unclear if they were working together or both just happened to organize protests at his home at the same time.

The organization had published the home addresses of the justices earlier in the week and called for people to join them to protest against the leaked opinion draft that will overturn Roe v. Wade.

Unless justices who voted to overturn the abortion legislation change their minds, abortion laws will be handed back to the states when the opinion is signed.

Wooten-Holway, a 39-year-old teaching assistant and aftercare staffer, told the Washington Post that “if the conservative justices are considering rolling back a precedent that protects what people choose to do with their own bodies, she says, then no home address is out of bounds.”

The marchers have made it to what appears to be Justice Kavanaugh’s house. pic.twitter.com/c5YJMULMv7

The energy is markedly more negative outside Kavanaugh’s house. The anger has become much more palpable than outside any other justices’ house. pic.twitter.com/zY2OY34hcA

The law here is clear — and very similar to the statutes that January 6th protesters are accused of violating, many of whom remain imprisoned today.

This is a violation of federal law. pic.twitter.com/4P2rZBSUBY

A large amount of the defendants who were at the Capitol are charged with violating 40 U.S. Code § 5104, which bans “parade, demonstrate, or picket in any of the Capitol Buildings.” Many were additionally charged under 18 U.S. Code § 1512, which prohibits protests that “otherwise obstructs, influences, or impedes any official proceeding, or attempts to do so.”

The max penalty for the protest at the homes of the justices appears to be one year in jail, a misdemeanor. For the Capitol protesters, the code section that the government is using for charges has a 20 year maximum prison sentence, and is a felony.

“The main problem that law enforcement usually has is guessing the intent of the protester. The code section for picketing in front of the justices houses requires the intent to interfere, obstruct, or impede. How can we know? We look at their language, their writing. So you can find evidence of intent through looking at their social media, for example,” a lawyer involved with some of the January 6 cases pointed out, though they asked to be quoted anonymously due to regulations about comments to the media.

When asked if the protesters were in clear violation of the law, or if there was a loophole, First Amendment expert and attorney Ron Coleman told Timcast that the case seems clear.

“If there’s a loophole, it’s the big one – the First Amendment. But not likely. Time, place and manner restrictions on speech are constitutional when they’re reasonable. What’s unreasonable about these?” Coleman asked.

Despite the residential protests being a seemingly clear-cut violation of federal laws, the White House refused to condemn the activists or urge them to choose another location when pressed about it earlier this week.

“I think the President’s view is that there is a lot of passion, a lot of fear, a lot of sadness from many many people across this country about what they saw in that leaked document,” Psaki replied. “We obviously want people’s privacy to be respected, we want people to protest peacefully, if they want to protest. That is certainly what the president’s view would be.”

Doocy followed up by asking about the activists protesting at the justice’s home addresses.

“So, he doesn’t care if they’re protesting outside the Supreme Court or outside someone’s private residence?” Doocy asked.

“I don’t have an official US government position on where people protest. I want it, we want it, of course, to be peaceful,” Psaki said.

Jen Psaki says Biden has no position on pro-abortion activists posting a map of the HOME ADDRESSES of Supreme Court justices pic.twitter.com/MKoDJLr8CW

On Twitter, the organization has also called on people to disrupt Catholic churches on Sunday.

Whether you’re a “Catholic for Choice”, ex-Catholic, of other or no faith, recognize that six extremist Catholics set out to overturn Roe. Stand at or in a local Catholic Church Sun May 8. #WarOnWomen #MothersDayStrike pic.twitter.com/v2vtpd12Gp

“Whether you’re a ‘Catholic for Choice’, ex-Catholic, of other or no faith, recognize that six extremist Catholics set out to overturn Roe. Stand at or in a local Catholic Church Sun May 8,” the group urged, adding the hashtags “#WarOnWomen” and “#MothersDayStrike.”

“Virginia’s long tradition of protecting religious liberty dates back to the founding of our Commonwealth, when Thomas Jefferson penned the Virginia Statute for Religious Freedom that is now enshrined in our Commonwealth’s Constitution,” Miyares wrote. “As Attorney General, I am charged with protecting this sacred right for all Virginians.”

“Federal law makes it a felony to intimidate, interfere with, or obstruct any person who is seeking to exercise his or her First Amendment right of religious freedom at a place of religious worship,” Miyares continued. “Similarly, Virginia criminal law prohibits obstructing the free movement of other persons, trespassing on church property, or obstructing proper ingress to and egress from a church. My office will be monitoring protest activities directed at houses of worship and will refer alleged criminal violations to the United States Department of Justice or to the appropriate Commonwealth’s Attorney.”

Miyares added that he “will not hesitate” to bring lawsuits against those who violate the law.

“Furthermore, federal law authorizes states to bring civil suits to protect their citizens’ free exercise of religion. If protest activities directed at houses of worship cross the line to illegal obstruction, intimidation, or interference, I will not hesitate to bring suit to protect the religious freedom of the citizens of this Commonwealth,” Miyares concluded.

According to a report from the Washington Examiner, “It’s not clear who is in charge of Ruth Sent Us or how the group is funded. The map displayed on its website contains a link to another activist group, Vigil for Democracy. And a link at the bottom of the group’s website is for an organizing page run by Strike For Choice, yet another activist group.”

“Strike For Choice boasts endorsements from 11 activist groups, the most prominent being Code Pink, a left-wing activist group that has received funding from major Democratic groups such as the Tides Foundation,” the report added.

Thomas, Gorsuch, Kavanaugh and Barrett voted with Alito — per the report.

Editor’s Note: Following the protests at the homes of the justices, the activists were allowed to disperse without any incident or arrests. 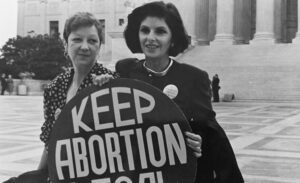 The Truth About Roe & Casey