An anti-abortion protester that calls himself “Pro-Life Spiderman” has been taken into custody after climbing the 844-foot Devon Tower in Oklahoma City.

The climber, Maison Des Champs, was taken into custody when he arrived at the top of the 50 story building on Tuesday.

Individual is in custody at top of building. pic.twitter.com/PJbf3suBQT

The climber’s Instagram account, @prolife.spiderman, posted a story saying that they were partnering with an organization called Let Them Live to “adopt a mom.” He also posted photos and videos while scaling the building. 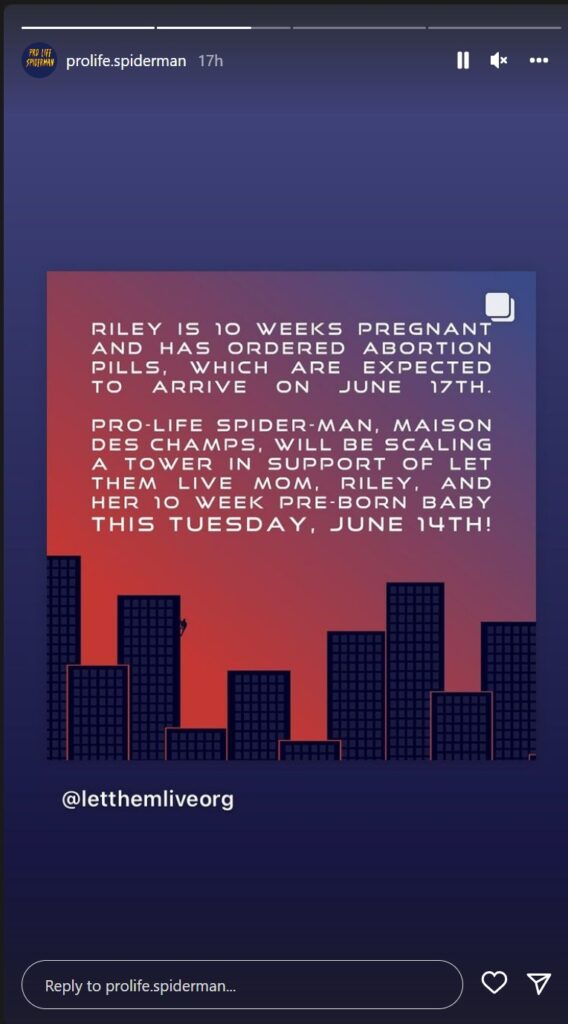 The mother, account to the account, is a 10-week pregnant woman named “Riley” who had ordered abortion pills to terminate her pregnancy.

“Riley is 10 weeks pregnant and has ordered abortion pills, which are expected to arrive on June 17th. Pro-life Spider-man, Maison Des Champs, will be scaling a tower in support of Let Them Live Mom, Riley, and her 10 week pre-born baby this Tuesday, June 14th!”

🚨BREAKING: A man is climbing the Devon Tower in downtown OKC. He is at least 10 stories up. Live coverage on @kfor. pic.twitter.com/vNrHZiaJp2

According to the fundraiser on Let Them Live’s website, “Riley was hoping for a lasting relationship, then she suddenly found out she was pregnant. Now she is 10-weeks along and ordered abortion pills, which are expected to arrive this Friday, June 17th. Before this, Riley was working hard as a nanny, hoping to save enough money to move her three kids out of a toxic living arrangement. The problem is, her boss just so happened to also be her boyfriend.”

The fundraiser is hoping to raise enough to provide Riley with safe housing and utilities, groceries, transportation, pregnancy and job financial counseling, and prenatal care.

Over $3,500 was raised for Riley during Des Champ’s climb.

Fox News reports that he has previously climbed the New York Times Building and the Salesforce Tower in San Francisco as anti-abortion protests.

Let Them Live is a non-profit organization that provides financial assistance to women considering abortion because they cannot afford to raise the child.

“Let Them Live was founded by Nathan and Emily Berning in 2019 after they were connected with a woman who was homeless and abortion-minded because she couldn’t pay her bills. They emptied their bank account and gave her the financial assistance she needed to keep her baby,” the organization’s website explains. “After saving her and her baby from abortion, they realized that many other women were getting abortions due to financial burden often caused by the father of the baby or from lack of support from immediate friends and family.”

“And so Let Them Live was born – with a mission dedicated to financially and emotionally supporting these moms so that they can confidently choose life for their babies,” the website continues.

The Devon Tower is the tallest building in Oklahoma.

The operator of a drone that followed Des Champs up the building has also been taken into custody.

Editor’s Note: this article originally said that he was arrested, but it is currently unclear if he has been charged. We will update this story as the situation unfolds. 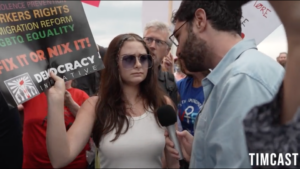