'Why do you need this many weapons to protect your home?' one activist told Timcast

March for Our Lives, a student-led organization focused on gun control reform, gathered near the Washington Monument in Washington, D.C., on June 11.

Thousands of protesters, including recently graduated and current high school students, gathered to demand gun control legislation in the wake of the recent mass shooting in Uvalde, Texas.

Elad Eliahu was on the scene for Timcast to hear protestors discuss “gun culture” in America, the responsibility of Congress to take action, and the complications posed by Second Amendment rights.

Another individual, who held a sign of Kentucky Congressman Thomas Massie and his family posing with guns, added: “Why do you need this many weapons to protect your home?”

At one point, a counter-protestor rushed the stage.

Though law enforcement told Timcast that the man was unarmed, he was subsequently arrested and removed from the scene. 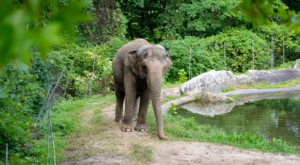 New York Court Rules Happy the Elephant is Not a Person