Biden also named his new nomination for director for the Bureau of Alcohol, Tobacco, Firearms and Explosives

The president also announced Steve Dettelbach as his newest nominee to take over as Director of the Bureau of Alcohol, Tobacco, Firearms and Explosives.

Dettlebach is a former United States Attorney for the Northern District of Ohio who lost a 2018 bid to become the state’s attorney general. During the race, Dettelbach supported requiring universal background checks for anyone buying a gun. The Obama appointee also advocated for reinstating the assault weapons ban and restricting guns for people with serious mental health problems.

“He has a proven track record of working with federal, state, and local law enforcement to fight violent crime and combat domestic violent extremism and religious violence – including through partnerships with the ATF to prosecute complex cases and take down violent criminal gangs,” according to a statement from the Biden administration.

The AFT has not had a permanent director since 2015. Biden withdrew his last nomination, former AFT agent and gun control advocate David Chipman, in September of 2021.

The Biden administration also announced on April 11 that “ghost guns” would be subject to new regulations. Typically, these independently-made weapons are crafted from collected parts, kits, or 3-D printers and are difficult to trace because they do not have serial numbers.

Commercial vendors of homemade gun assembly kits will now need to apply for a federal license and include a serial number on all their products. They will also need to run background checks and keep records of their sales for as long as they are in business.

“Last year alone, there were approximately 20,000 suspected ghost guns reported to ATF as having been recovered by law enforcement in criminal investigations – a ten-fold increase from 2016,” the Biden administration said.

Federally licensed dealers and gunsmiths will be required to add serial numbers to unmarked guns that come into their possession.

Gun control advocates have celebrated the news as a policy win.

“Ghost guns look like a gun, they shoot like a gun, and they kill like a gun, but up until now they haven’t been regulated like a gun,” John Feinblatt, president of Everytown for Gun Safety, told CBS News.

Others have objected to the rule as a constitutional overreach.

“The Constitution does not authorize the federal government to prevent you from making your own firearm,” said U.S. Representative Thomas Massie the night before the announcement. “This a fact that has been recognized for 200+ years. Also, Article 1, Section 1 (literally the first operative sentence in the Constitution) says Congress makes law, not POTUS!”

The Constitution does not authorize the federal government to prevent you from making your own firearm. This a fact that has been recognized for 200+ years. Also, Article 1, Section 1 (literally the first operative sentence in the Constitution) says Congress makes law, not POTUS! pic.twitter.com/vTFRvKYTVi

In a statement on Twitter, the advocacy group Gun Owners of America warned the “ghost gun” regulation would “create a comprehensive national gun registry” and violate the Second Amendment.

Dettlebach’s nomination must be confirmed by the Senate before he can assume the directorship. 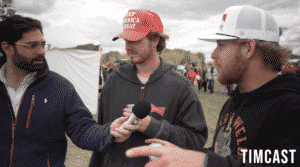