President Joe Biden’s will delay his address to the nation about the developing surge of COVID-19, specifically the Omicron variant, has been met with criticism for what appears to be a lack of urgency on his behalf.

The criticism grew following troubling remarks by Vice President Kamala Harris on Friday. She stated that the administration was not prepared for Omicron as cases doubled in the previous 24 hours.

As it stood, late Saturday, all but six states had confirmed cases of the new variant, stoking fears of shutdowns similar to those in the Spring of 2020.

Critics have stated that waiting until Tuesday to outline a plan against Omicron is not a proactive move by the President, who has repeatedly vowed to “shut down the virus.”

Mark Knoller, a former White House correspondent for CBS, tweeted, ‘If the Pres has something urgent to say about Covid, why wait until Tuesday?’

If the Pres has something urgent to say about Covid, why wait until Tuesday?

Bob Wachter, Chair of the Department of Medicine at the University of California San Francisco, tweeted concerns about the Omicron variant. Wachter relayed the experience from a friend who has had three jabs of the vaccine but tested positive this week after exposure to the variant.

Anecdote showing how immune-escape-y Omicron is: spoke to NYC pal. Had Covid last yr & has had 3 mRNAs. Went to holiday parties last wk – proof of vax required but no masks. Today he tested pos. Feels flu-ish but luckily nothing worse.
It's a different foe – treat it w/ respect.

Erin Sanders, a biologist, and veteran COVID researcher, tweeted to President Biden, “#Omicron doubles in 2 days. Time is everything. @POTUS @ VP, please, we cannot wait. Do not sit in your ivory tower and watch the country burn.”

*FUCKING TUESDAY* (sorry tweeps I lied, feral screeching has resumed) #Omicron doubles in 2 days. Time is everything. @POTUS @VP please we cannot wait. Do not sit in your ivory tower and watch the country burn.

Bree Newsome, a North Carolina community leader, tweeted, “Cases will have doubled by the time Biden makes his planned speech on COVID Tuesday. That’s how fast this thing is moving”.

In March 2020, when the pandemic first began, many criticized former President Donald Trump for failing to attack COVID adequately. During the 2020 election cycle, Biden sold himself as a more sensible leader for the pandemic.

I'm not going to shut down the country.

I'm not going to shut down the economy.

I'm going to shut down the virus.

On July 4, 2021, Biden declared America’s independence from the virus, arguing that vaccines had significantly reduced the threat of COVID. But a mere 30 days later, the Delta variant invaded the nation, resulting in record-breaking surges and a healthcare crisis across the US.

Omicron now appears to threaten to do that and more.

The apparent surge, which saw record-breaking new cases nationwide Saturday, leaves many wondering why Biden is waiting until Tuesday to unveil his plan.

The White House also appears to be scrambling to contain the fallout from Vice President Harris’s statement on Friday during an interview with the Los Angeles Times.

Harris seemed to blame scientists for the administration’s failure to be better prepared for Omicron and Delta, as it appears the new strains may send the country spiraling back into large-scale shutdowns.

The Vice President insisted that the virologists who have consulted the administration on the pandemic were blind to the coming surge.

Administration officials tried to put a more positive spin on the comments by Harris, claiming that she meant that the President and his aides did not foresee the mutations.

As the surge continues to grow, a mirror of the events in Europe, leaders across Europe are taking immediate action to handle the health crisis. The variant has now been confirmed in 89 countries worldwide.

Experts advised the Netherlands to impose a hard national lockdown before Christmas. The country is expected to close all but essential stores Sunday, resulting in a surge of panicked shopping over the weekend to get ahead of the coming restrictions.

France and Austria have tightened travel restrictions as of Saturday. Paris has canceled its New Year’s Eve fireworks. Denmark closed theaters, concert halls, amusement parks, and museums and Ireland imposed an 8 pm curfew on pubs and bars and put restrictions on the size of public gatherings. Ontario has done the same, reinstating heavy limits on the number of people who may gather indoors and outdoors.

The number of cases is doubling in 1.5 to 3 days in areas with community transmission, the WHO said on Saturday. The highly transmissible variant appears to evade immune response from vaccination or prior infection.

Editor’s Note: A previous version of this article was titled “President Biden Under Criticism for Postponing COVID Announcement Until Tuesday.” Upon further review, the original title indicated an editorial framing that is not ideal for a news report. As a result, the title has been revised accordingly. 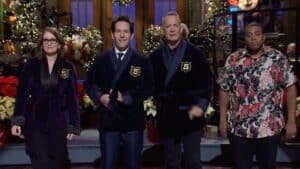 SNL Wasn't Exactly 'LIVE' on Saturday Due to Omicron Concerns