Professor Peter Boghossian has resigned from Portland State University and published an open letter critiquing the biased agenda of the school’s administration.

Boghossian, who taught philosophy, accused the administration of “fostering an environment hostile to intellectual inquiry and dissent.”

In his letter addressed to Provost Susan Jeffords, he explained that he invited an array of speakers — including Flat-Earthers, Christian apologists, global climate skeptics, and Occupy Wall Street advocates — to his class with the goal of encouraging his students’ ethical and intellectual growth.

“From those messy and difficult conversations, I’ve seen the best of what our students can achieve: questioning beliefs while respecting believers; staying even-tempered in challenging circumstances; and even changing their minds,” he wrote. “I never once believed — nor do I now — that the purpose of instruction was to lead my students to a particular conclusion. Rather, I sought to create the conditions for rigorous thought; to help them gain the tools to hunt and furrow for their own conclusions. This is why I became a teacher and why I love teaching.”

He added: “Brick by brick, the university has made this kind of intellectual exploration impossible.”

He says the university’s obsession with race, gender, and victimhood has ultimately led the school to fail in “fulfilling this duty.”

“Students at Portland State are not being taught to think. Rather, they are being trained to mimic the moral certainty of ideologues. Faculty and administrators have abdicated the university’s truth-seeking mission and instead drive intolerance of divergent beliefs and opinions. This has created a culture of offense where students are now afraid to speak openly and honestly.”

He detailed the harassment and retribution he faced when he questioned the “new culture.” He was the subject of a Title IX investigation following a false accusation from a former student. Flyers circulated campus depicting Boghossian with a Pinocchio nose. He was spit on while walking to class on campus and his colleagues told students to avoid his class. Swastikas appeared in school bathrooms with his name underneath.

“I have taught my students the importance of living by your principles,” he wrote. “One of mine is to defend our system of liberal education from those who seek to destroy it. Who would I be if I didn’t?”

Boghossian joins the growing ranks of academics who have left their university posts over similar concerns. Andrei Serban, a Romanian-born theater and opera director who fled communism, made headlines in November when he resigned as a professor from Columbia University because of the school’s oppressive identity politics. Professors have also resigned from the University of Missouri, Yale University, and Vanderbilt University.

Over 2,000 people signed a petition claiming Kindsvatter “hides behind sophisticated, elitist rhetoric to mask his self-victimization and racist ideology — a tactic employed by white elites in America to cover up their racism.” 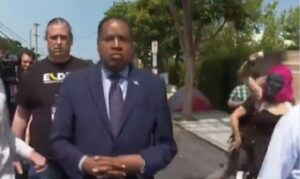