“I don’t like that they got a black actress to play Ariel because that’s not the Ariel that I grew up with,” said the YouTuber. “However, in regards to why these race swaps are bad, that is not my argument. I’m not arguing for nostalgia, I don’t care about the original source material, and I’m definitely not interested debating the possibilities of black mermaids with a mythology major.”

The YouTuber claimed that Hollywood’s diversity campaign was unintentionally harming society. She provided examples of pushback from social media users over her opinion of the film. Gothix, who is black, said she has been accused of being “anti-black” and “problematic” over her criticism of Disney’s decision to cast a black actress as Ariel — a decision she refers to as “performative diversity.” The YouTuber warned, “we’re gonna end up paving the road to hell with good intentions.”

“The Black Little Mermaid is a HUGE problem and if we’re not vigilant we could end up becoming useful idiots for Hollywood and eventually politicians,” said Gothix in a Friday tweet.

The Black Little Mermaid is a HUGE problem and if we're not vigilant, we could end up becoming useful idiots for Hollywood and eventually, politicians.

“There is something deeply wrong with a person who becomes hostile over a Disney movie. The fact that people are so eager to apply the racist label and harass someone who opposes this film should be a reason for concern,” the YouTuber continued. “Whenever we see a lot of defensiveness surrounding these remakes it’s because they’re defending what the film represents. That usually being the glorification of a specific skin color, gender, or sexuality.”

Gothix posts videos to her YouTube channel commenting on video games, movies, and pop culture. In late 2020, she opened up to viewers about her political leanings in a video titled “Why I’m no longer a Democrat. My #WalkAway story.”

“They purposefully leave out very important information to keep you focused on the racism part,” Gothix said, noting her observation on media coverage during the 2020 news cycle.

Earlier this month, the YouTuber shared her experience voting in the Rhode Island primary. She claimed she was profiled as a Democratic voter by poll workers who were allegedly prepared to hand her the wrong ballot.

“She thought I made a mistake, and so I had to reach over and hit ‘confirm’ to submit my choice,” Gothix said. “What if I didn’t hit confirm? Would they have gone back and changed it? Would I just be stuck with a Democrat ballot? It’s weird that I even have to contemplate that.”

Gothic said poll workers were flustered by her request for a Republican ballot and encouraged viewers to double check their ballots to ensure their votes were accurate.

“We have to get involved. We can’t keep complaining that things never change and these elections aren’t secure if we’re not up here applying for these polling positions,” said Gothix. 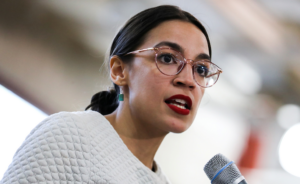