The network noted that the results give Fetterman an advantage narrowly outside of the survey’s margin of error.

The pollsters found that Oz has a broad advantage among voters focused on economic issues, beating Fetterman 64 percent to 32 percent. However, the Democrat has a wide margin among voters who cite abortion as their top issue, 79 percent to Oz’s 21 percent.

When dividing the voters by party line, 97 percent of registered Democrats said that they will vote for Fetterman, while 86 percent of Republicans said the same about Oz.

“Although Fetterman is viewed far more favorably than Oz in Pennsylvania (48% of likely voters hold a favorable opinion of the Democratic nominee, 38% of the Republican candidate), his unfavorable rating is nearly as high (46%),” the CNN report says. “A majority, 55%, view Oz unfavorably. There is very little overlap in views of the two candidates: 79% of Pennsylvania likely voters like one of them and dislike the other, while just 1% have a positive view of both and only 8% have an unfavorable view of both.”

The majority of voters said that they are more concerned about where each candidate stands on the issues than their party having control of the Senate. Only 27 percent cited party control as their top issue.

The candidates are competing to replace retiring Sen. Pat Toomey, a Republican.

The CNN polls were conducted by SSRS from October 13-17 in Pennsylvania and Wisconsin, using a combination of online and telephone interviews. Results among the full sample of 901 registered voters in Pennsylvania has an error margin of plus or minus 4.1 points. 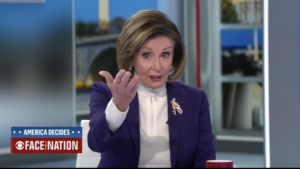 'The Fight Is Not About Inflation': Nancy Pelosi Says Cost Of Living Is Greater Threat