A new Monmouth University poll has found that nearly half of all Americans are “angry” about pandemic-related changes in their daily lives.

A majority of 60 percent of respondents said they feel “worn out” by the changes they have had to make during the two years that the pandemic has been going on, according to the survey.

“The fact that Americans say they have had enough should be no surprise. Every time we try to adjust to a new normal, another variant pops up to put us on guard again. This perpetual unease is having an impact on how we view those charged with handling the pandemic,” Patrick Murray, director of the independent Monmouth University Polling Institute, said in a statement accompanying the results.

Republicans were far more likely to be angry about the changes than Democrats, with 63 percent of those identifying with the GOP reporting some level of anger, compared to only 34 percent of those on the left.

“When it came to being worn out by the pandemic, however, political party did not play a role in responses. Sixty-four percent of Republicans said they feel at least a little worn out by pandemic-related changes, while 63 percent of Democrats said the same,” the Hill report noted.

However, the public is split on whether or not President Joe Biden is doing a good job or a bad job, with both options receiving 46 percent.

“Prior to this poll, though, Biden’s ratings on the pandemic had consistently been in net positive territory including as recently as last month (53% good and 41% bad). Positive ratings for how Biden is handling the pandemic has dropped more among independents (from 50% in November to 38% now) than it has among either Republicans (from 16% to 10%) or Democrats (from 90% to 88%),” the pollsters report. “Also noteworthy is that this decline has occurred mainly in states Biden won in 2020 (from 60% in these states last month saying he has done a good job to 47% now). Opinion of Biden’s performance in the states he lost is stable (from 44% good job in November to 45% in December).”

The poll surveyed 808 adults in the U.S. between Dec. 2 and Dec. 6. The margin of error is plus or minus 3.5 percentage points. 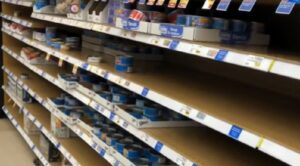