Planned Parenthood has responded to the leaked Supreme Court draft that would overturn Roe v. Wade, referring to the potential decision as “horrifying” and “devastating.”

The 98-page draft opinion written by Justice Samuel Alito is the first document of this magnitude to be leaked from the Supreme Court. It was published on Monday evening after being leaked to Politico.

In the draft from February, Justice Alito wrote that “Roe was egregiously wrong from the start” and “we hold that Roe and Casey must be overruled.”

In a press release about the leak, Alexis McGill Johnson, president and CEO, Planned Parenthood Federation of America, wrote, “let’s be clear: Abortion is legal. It is still your right.”

“This leaked opinion is horrifying and unprecedented, and it confirms our worst fears: that the Supreme Court is prepared to end the constitutional right to abortion by overturning Roe v. Wade,” McGill continued. “While we have seen the writing on the wall for decades, it is no less devastating, and comes just as anti-abortion rights groups unveil their ultimate plan to ban abortion nationwide. Understand that Planned Parenthood and our partners have been preparing for every possible outcome in this case and are built for the fight. Planned Parenthood health centers remain open, abortion is currently still legal, and we will continue to fight like hell to protect the right to access safe, legal abortion.”

The press release noted that, “though the decision is not yet final and abortion remains legal, if this decision issues, 26 states are poised to move quickly to ban abortion, leaving more than 36 million women of reproductive age — and other people who can become pregnant — without abortion access.”

Planned Parenthood is the nation’s leading provider and advocate of abortion in the United States and has more than 600 clinics across the nation. 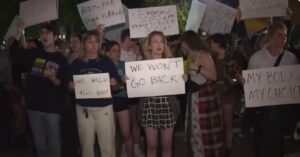